The term ancient philosophy generally refers to Hellenistic philosophy, which was born in the seventh century BC, with Socrates and Plato, and their successors in the Roman Empire as well as in the Arab-Muslim world. It thus applies to a so-called “Western” philosophy, which roughly corresponds to Greco-Roman antiquity – the wisdoms or philosophies of other civilizations (China, India, etc.) are not generally understood under this term . It also includes what an important part of the history of philosophy considers as the origins of philosophy, namely the presocratic thinkers, the first of which date from the middle of the seventh century BC.

Understood in this sense, the cradles of ancient philosophy are located in Ionia (Greece of Asia) at the Mediterranean coast of present-day Turkey, and what is called Greater Greece, the south of Italy.

The Dictionary of Ancient Philosophers, directed in particular by Richard Goulet, counts 2 491 ancient philosophers, over a period extending from the 7th century BC up to the 6th century BC, speaking in Greek, Latin, Arabic, Hebrew, Syriac, Armenian, Georgian, etc., and born in cities from the Peloponnese to Asia Minor or from Rome to Egypt. But, in general, there are very few traces of these philosophers. Ancient philosophy is also characterized by the existence of schools or currents, the main ones being neo-Platonism, cynicism or skepticism, epicureanism and stoicism. The year 529, for example, marks the closing of the neo-Platonic school of Athens by the Byzantine emperor Justinian, who forbids, by edict, to “teach philosophy”.

In Europe, the spread of Christianity through the Roman world marks the end of the so-called Hellenistic period, and brings us to the beginning of medieval philosophy – which is marked in a major way by a re-discovery, and consequently a reinterpretation, of ancient philosophy, especially through what has been called the translatio studiorum.

The Presocratics are philosophers who lived from the middle of the seventh century BC until the time of Socrates. They actually participated in the origins of philosophy.

Let us mention the schools commonly accepted in this philosophical period:

The “golden age” of Greece

Socrates (in ancient Greek Σωκράτης: Sōkrátēs) is considered the father of Western philosophy because he focused his philosophy solely on the human being, thus departing from the studies of the presocratic thinkers on nature. He was also the initiator of the methods that will remain those of philosophy, by questioning the definition of certain notions, and by developing dialectical examinations.

Born in -470, near Athens, of a mother-midwife, Phenaretus, and of a stonemason father, Sophroniscus, it is astonishing that Socrates has left absolutely no writing; Plato, his main disciple, is the philosopher by whom we know best his teaching and his methods. On his life, however, the most reliable testimony is found in the Memoirs of Xenophon, another disciple of Socrates.

(Bust of Socrates in the Louvre. )

An event would have definitely plunged him into philosophy: the visit of one of his friends to the oracle of Delphi. This friend having asked the oracle who was the wisest of men, he replied that it was Socrates himself, which deeply overturned him and decided his “conversion”.

He frequented the Sophists (Hippias, Protagoras …) and often discussed with them in order to unmask their pseudo-science. He takes for himself the sentence written on the pediment of the temple of Apollo at Delphi “Know yourself” (Γνῶθι σεαυτόν: gnōthi seautón), which should not be understood in the sense of modern introspection, but rather in the sense of knowing its place in the city, and also in nature, remembering that men are mere mortals. Its true motto, however, is: “I know only one thing, that I know nothing” (“Ἓν οἶδα ὅτι οὐδὲν οἶδα”).

The method of Socrates can be summed up in one word: the maieutics (of μαιευτικη: maieutikè), or “art of giving birth”. He claimed that, although he was ignorant, he was able, thanks to his way of questioning, to give birth to the minds of his interlocutors with the knowledge they already carried in them without knowing it. He called this method “maieutics” to draw a parallel with his mother’s job.

But Socrates also possessed an art of refutation (or elenchos), which consisted in pushing the point of view of his interlocutor as far as possible, until it led to contradictory consequences, which clearly showed the falseness of the starting point of view. In this way he managed to change his point of view by the use of reason alone, without rhetorical artifice.

Socrates claimed to have a demon (δαἰμων: daimon), that is to say, an inner voice (and not a demon in the evil sense of the word), a superior power that sometimes prevented him from doing anything that he was preparing to do. Thus, it is said that one day Aristippus of Cyrene sent him twenty silver mines, and that Socrates dismissed them on the pretext that his demon forbade him.

In -399, after a trial (narrated in Plato’s Socrates Apology) where he was accused of corrupting youth, not to recognize the gods of the city and to import new ones (alluding to his ”daimon” demon), he was found guilty by a majority vote and sentenced to death. He had to swallow a deadly poison: hemlock. Socrates would have refused, out of fidelity and respect for the laws of the city, to escape from prison on the eve of his death on the advice of a friend, although knowing him to be condemned unfairly (see Plato’s Criton). The last hours of Socrates, as well as his death, are narrated in Plato’s Phaedo.

He asserts that he believes in the Athenian gods, as none of his accusers believe, formulation available for multiple possible interpretations, including that in their existence as metaphors.

His last words would have been: “Crito, we owe a cock to Aesculapius”, a sentence whose meaning was interpreted in different ways. It is possible that Socrates thereby asks his friend Criton to make a sacrifice to the god of medicine, death being conceived by Socrates as a remedy and deliverance in Plato’s Phaedo, which ends with these words. 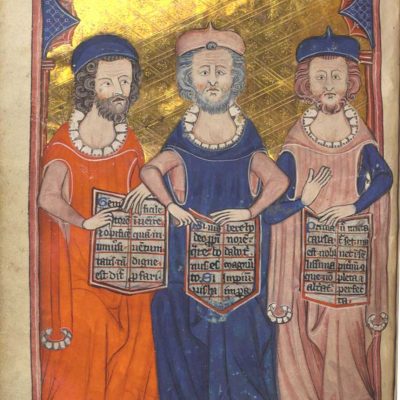 Medieval philosophy is the set of works and philosophical currents developed during the Middle Ages...

The archaeologists have discovered objects whose purpose is supposed to represent an ancient form of...