An overview of heavy water: definition, properties, uses (with emphasis on the use of heavy water in nuclear reactors as a moderator and coolant). Technologies for obtaining heavy water, detailing the process known as the Girdler sulphide process, or Geib-Spevack (GS). A brief history of the global industrial production of heavy water. 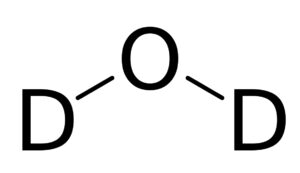 * Unless otherwise stated, data are given for materials in their standard condition (at 25 °C, 100 kPa).

Heavy water has many and various uses, of which I mention the most important:

In nuclear magnetic resonance, heavy water is used as a solvent in spectroscopy when the nuclide of interest is hydrogen, due to the different magnetic moment of the two types of water.

In organic chemistry, it is used as a source of deuterium.

In infrared spectroscopy, heavy water is used in the collection of FTIR spectra of proteins in solution, improving the resolution over light water.

In neutrino detection systems, heavy water is used as a solvent for the neutrino absorbing medium and for the detection of exotic neutrinos.

In self-powered lighting and controlled nuclear fusion, and other uses that use tritium, it is obtained in some cases in moderated heavy water reactors, or by methods in which deuterium captures a neutron and transforms into tritium.

In certain types of nuclear reactors, especially CANDU-type nuclear reactors, heavy water is used as a neutron moderator to slow down the neutrons and thus increase the effective cross-section of the fissile uranium-235, also contributing to great stability within the chain reaction. Heavy water is also used as a cooling agent in the heat transfer system due to its specific physical properties.

CANDU (CANada Deuterium Uranium) nuclear reactors use pressurized heavy water (Wang 2012) and (originally, natural) uranium fuel. In October 2011, the Canadian federal government licensed the CANDU project to Candu Energy (a wholly owned subsidiary of SNC-Lavalin), which provides support services for the existing sites and also handled the previously blocked facilities in Romania and Argentina through a partnership with the China National Nuclear Corporation.

The heavy water used as a moderator in CANDU nuclear reactors helps to separate neutrons and uranium because 238U has a high affinity for neutrons of intermediate energy (“resonance” absorption), but is easy to fission (has a better cross section) only for the few energetic neutrons above ≈1.5–2 MeV. (Rouben 2011) By moderating, most neutrons will reach a lower energy and be more likely to cause fission, resulting in better “burning” of natural uranium, and thus greater efficiency. Also, heavy water allows for greater stability of the chain reaction.

Deuterated water (semiheavy water), HDO, occurs naturally in normal water in a ratio of about 1 molecule to 3,200 molecules of light water (H2O). Deuterated water can be separated from normal water by distillation, electrolysis, or by various chemical exchange processes, by isotopic exchange. The difference in mass between the two hydrogen isotopes translates into a slight difference in the rate of the reaction. Producing pure heavy water by distillation or electrolysis requires a large cascade of alembics or electrolysis chambers and consumes large amounts of energy, so chemical methods are generally preferred. The most cost-effective process for producing heavy water is the dual-temperature sulphide exchange process (known as the Girdler sulphide process) developed in parallel by Karl-Hermann Geib and Jerome S. Spevack in 1943. (Waltham 2011) Heavy water obtained can have varying degrees of purity, from 98% to 99.75–99.98% for use in nuclear reactors, and occasionally higher isotopic purity. 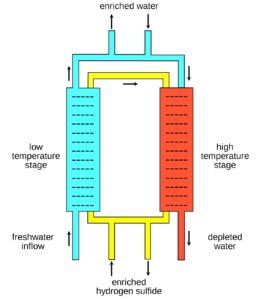 By the process known as the Girdler sulfide process, or Geib-Spevack (GS), (Keyser, Mader, and O’Neill 1986) invented by Karl-Hermann Geib and Jerome S. Spevack independently and in parallel in 1943, (Castell and Ischebeck 2013) heavy water is produced industrially from natural water. The method uses isotopic exchange between H2S and H2O, in several steps (stages). One stage consists of two columns with sieve trays (plates), one maintained at about 30 °C (cold column) and the other at 130 °C (hot column). The enrichment process is based on the separation difference between 30 °C and 130 °C, with the equilibrium reaction:

Hydrogen sulfide gas is circulated in a closed loop between the cold column and the hot column. In both columns, water enters from top to bottom and hydrogen sulfide circulates from bottom to top. The isotopic exchange actually takes place on the plates with holes. In the cold column, deuterium migrates from gaseous hydrogen sulfide to liquid water. In the warm column, the transfer of deuterium takes place from water to hydrogen sulfide gas. In a cascaded (multi-stage) system the enriched water from the first stage is fed to the next stage and further enriched. Through this process, the water is enriched to 15-20% D2O. Further enrichment into heavy water, above 99% D2O, is done in another process, usually by distillation. (Rae 1978)

Hydrogen sulfide (H2S) used in the isotopic exchange to obtain heavy water is a colorless, poisonous, corrosive and flammable gas, with traces in the ambient atmosphere having a characteristic foul smell of old eggs. (Greenwood and Earnshaw 1997) Hydrogen sulfide is obtained by separating it from more complex gas mixtures with a high H2S content, by treating hydrogen with elemental sulfur, or from hydrocarbons. (Faraji et al. 1998)

In 1934, Norsk Hydro built the first heavy water plant at Vemork, Tinn, producing 4 kilograms per day. (Feilberg 2018) From 1940 and throughout World War II, the plant was under German control. In 1943, through Operation Gunnerside, Norwegian commandos managed to partially destroy the factory and heavy water reserves. (Gallagher 2002) Air raids in 1943 led the Nazi government to move all heavy water to Germany, an operation foiled in 1944 by a Norwegian partisan.

In the United States, the Manhattan Project built three heavy water plants as part of Project P-9, and other quantities were purchased from Canada. The domestic production plants were closed in 1945. The United States developed the chemical shift manufacturing process at the Dana, Indiana plant in 1945, and then at the Savannah River, South Carolina plant in 1952.

Sweden produced 2,300 liters per year of WW2 heavy water, which was then sold to Germany, and to the US Manhattan Project. (Edfast 15:16:00Z)

Israel operates a heavy water reactor purchased from Norway in 1959.

Since 1996, a heavy water production plant has been built in Iran at Khondab near Arak, (GlobalSecurity 2011) expanded in 2006. Iran exports excess production according to the agreements.

In India, the produced heavy water is exported to countries such as the Republic of Korea, China and the United States. (Laxman 2007)

In Pakistan there is a 50 MWth natural uranium heavy water research reactor at Khushab in Punjab province for the production of plutonium, deuterium and tritium. (Fas.org 2000)

The most powerful scientific statements are usually those offering the broadest scope of application; Newton’s...