Upon the very desire of the Empress, Prud’hon has placed her august model in an agrarian landscape, in the groves of Malmaison. Large trees with thick foliage form a nice shade that leaves only a thin section of sky. On a sort of natural bench made of rocks, Josephine de Beauharnais, wife of Napoleon and Empress of the French, rests her supple and charming body of Creole. His folded left arm leans on the stone forming backrest and the hand with tapered fingers supports the thin head, framed by black hair. The right arm naturally falls along the body and comes to rest on a large purple coat placed under it and whose end wraps around the knees. This coat is not only there to protect the empress against the moisture of the stone; It certainly also has the function of emphasizing by contrast the muslin of the dress and the satin grain of the flesh. The head is slightly inclined to the right, in a pose of reverie; with his elongated oval, his black eyes full of sweetness, his straight nose slightly raised towards the point, his large and smiling mouth, the face possesses a small and childish grace. The dress is largely low-cut, simply restrained to the shoulders that reveals and the roundness of the breasts. A cord placed high above the waist, in the fashion of time, serves as a belt. Under the soft muslin, the long legs are drawn and lean, wearing white satin boots, on a thick carpet of moss.

The whole of this composition is infinitely graceful and Prud’hon, who excelled in portraiture, has revived in this canvas, with an art both scholarly and exquisite, the likeable figure of the first woman of the hero. As we describe her the History, good, pleasant, superficial, coquettish, even frivolous, as it appears to us in the portrait which the painter has drawn. What deep thoughts can shake this head of bird? Does she dream big things or just a new adornment? Let’s bet that it is an ornament; the smile that filters through the eyelids and plays on the lips indicates that the plans of the great man of which she is the wife have no part in her dream. Prud’hon, in this magnificent portrait, has written a page of history; on the front of his model he was able to fix all the childish and disappointing traits of the character of Josephine, who was a charming and good woman, but who never knew, for the misfortune of Napoleon and France, to be an Empress.

This portrait consecrated Prud’hon’s reputation and earned him imperial favor. Josephine was charmed with this painting; Napoleon was also very satisfied, and when, after the divorce, he married Marie Louise, he charged Prud’hon with the decoration for the reception of the new Empress. It was also he who drew the toilet for Marie-Louise, the table, the mirror, the jewelery boxes, the psyche, the armchairs, the washbasin, and so on. With this grace, of which he embellished everything, Prud’hon succeeded in softening and rendering the cold and rebellious style of the Empire agreeable. He realized a marvel of elegance and taste. In 1815, after the fall of the Emperor, Marie-Louise had carried this toilet to Parma; she left without protesting to commit sacrilege, by Count de Bombelles, to destroy this work of art. All these objects recalled Napoleon, and it was wished to efface his memory in the heart of Marie Louise, who was already disposed to deny the great man.

As frivolous as Josephine, Marie-Louise had neither her charm nor her goodness. While the repudiated wife still mourned Napoleon’s loss, the Austrian archduchess brought to the throne of France all the grudges of her race, all the indifference of a soul without grandeur, and Napoleon vanquished had not yet climbed the first steps from her ordeal, which she was already engaging in low and shameful sentimental intrigues.

Prud’hon had painted the portrait of Marie Louise and that of the King of Rome. He was even awarded by the Emperor the title of professor of drawing of the Empress. A purely platonic function, Marie-Louise is totally rebellious to any effort of mind and having no taste for things of art. Several times the painter, anxious for his role, strove to fix the attention of his pupil, he had to give it up. From the beginning of the lesson, the Empress was showing signs of weariness. Then, no longer holding it: “I am very sleepy, Monsieur Prud’hon,” she said to him. To which Prud’hon replied: “Sleep, Madam,” and after a deep bow he left the sovereign to sleep.

The portrait of the Empress Josephine, when it appeared, raised the malicious comments of the opponents of Prud’hon. David and his school, in particular, were hostile. He was sung, accused of having flattered his model, and of having consulted little with nature. But the jealous clamors have long since been extinguished and the work survives, in its triumphant and immortal youth. 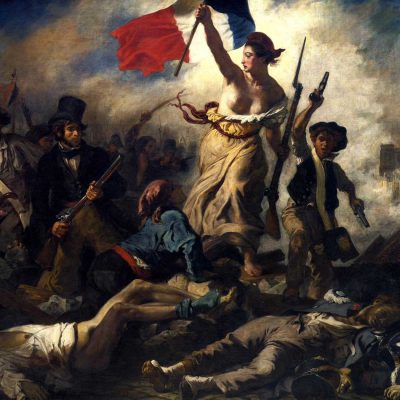