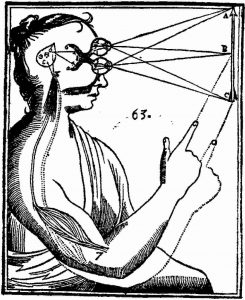 (Mechanism of the vision according to a drawing of René Descartes.)

Much of the debate in philosophy of mind questions the hypothesis that perceptual experiences have both an intentional content – by which objects, properties, and events appear to us that seem independent of our mind – and phenomenal or qualitative aspects corresponding to the “effect that it makes” to have such experience in such sensory modality (visual, auditory, etc.).

The question of the (objective or “phenomenal”) nature of perceptual content is an important issue in current debates. Realism argues that objects to which perception gives us access are objects of the physical world existing independently of being perceived, while unrealistic theories of perception stress the subjective dimension of perceptual experience.

Direct realism considers that perception gives us direct access to its objects and properties. It is not a question of a theory at first, but rather of a development of our prephilosophic conception of the world: that of common sense. We then speak of naive realism to describe this spontaneous conception of our relationship to the world.

In its strictly philosophical form, direct realism is based on how we construct sentences. The accusative propositional constructions of the type “X perceives (that) P”, are said “factive”, that is to say that they claim to account for a fact of reality. For example, when we say, “I see a tree,” we will normally consider that this tree we perceive is a tree that exists in the world, outside and independently of our mind.

We can summarize this direct realism as follows:

Therefore, our claim on the knowledge of the world is justified.

Direct realism thus restores the old conception of the immediacy or transparency of perception. Apart from anecdotal cases of illusions or hallucinations, perception puts us in touch with the world as it is.

Today, direct realism finds its philosophical justification in the disjunctive theory of perception, which considers that there is a difference of nature between veridical or authentic perceptions and illusions, to the point that these can not even be considered as (illusory) experiences of perception.

The classical origin of indirect realism is the theory of knowledge advanced by John Locke in his An Essay Concerning Human Understanding (1690). Following Locke, some empiricist philosophers, including Bertrand Russell, G. E. Moore, and A. J. Ayer, have claimed the possibility of combining the thesis that all our experiences are about sense data, and on the other hand the postulate of a world at least partly independent of our experiences. The physical world exists to a large extent independently of our mind, and it must be distinguished from the world of sensitive data to which perception gives us access. More precisely, perception does not give us access to the physical world, but to another world, populated by mental contents called “sense-data”. Sense data have exactly the properties they seem to have: they account for how things appear about the experience, regardless of how things are actually (physically). However, it is on this basis that the representations of physical objects are inferred.

The objection traditionally made against this position is that it would not allow one to distinguish truthful perceptual experiences from mere illusions or hallucinations. Typically, indirect realism uses a causal theory to solve this problem: if my experience is appropriately caused by an element of the physical world, knowledge of this element, based on experience, becomes possible.

According to this theory, perception is understood as a form of belief that is “about” something existing in the world. Perception is defined by a perceptual content that can be likened to a belief with a propositional content of the type: X believes that P. Like a belief, an object perception must respond positively to satisfaction conditions to be true. Just as the content of a belief determines the conditions under which it is true, the content of a perceptual experience determines the conditions under which it is true. This elementary form of belief is based on a representative content that has an act/object structure but which does not itself constitute an object, because it does not have its own existence.

The introduction of the notion of propositional perceptual content is the central element of this theory: just as an (empirical) proposition has two “poles”, in the sense that it may be true but may not be true, a particular perception may be true but it can also be wrong. We then speak of bipolar theory to qualify this position.

In this sense, illusion and hallucination are simply understood as inappropriate representations.