A thermal transfer, more commonly called heat, is, along with work, one of the modes of internal energy exchange between two systems: it is a transfer of thermal energy that takes place outside thermodynamic equilibrium. There are three types of heat transfer, which can coexist:

The quantity of heat Q is the quantity of energy exchanged by these three types of transfers, it is expressed in joules (J). By convention, Q > 0 if the system receives energy. Thermodynamics is based on the concept of heat to erect the first and second principles of thermodynamics.

The meaning of the word “heat” in everyday language is often ambiguous and confusing, especially with temperature. While it is true that spontaneous heat transfers take place from regions of higher temperature to regions of lower temperature, it is nevertheless possible to achieve thermal transfer from a cold body to the hot body, using a thermal machine such as a refrigerator. Moreover, during a change of state, a pure substance does not change its temperature while it exchanges energy in the form of heat.

History and evolution of terminology

Heat, in everyday language, is often confused with the notion of temperature. Although very different from a scientific point of view, the two notions are all the same linked to each other and the history of the genesis of thermodynamics has sometimes induced this confusion. Expressions such as “water is hot” could lead to the mistaken belief that heat is a property of the system when it is a transfer of energy (from water, hot, to the surrounding environment, colder). Also, it is incorrect to say “water loses heat” when it cools. The expression “heat transfer” is however a very widespread pleonasm.

Until the 18th century, scientists believed that heat was made up of a fluid called phlogiston (phlogiston theory).

(Schematic flow of energy in a heat engine. )

In the 19th century, heat was assimilated to a fluid: caloric. The progress and success of calorimetry imposed this theory until the middle of the 19th century. This concept is for example taken up by Sadi Carnot: a heat engine can only operate if heat circulates from a body whose temperature is higher to a body whose temperature is lower; reasoning corresponding to an analogy with a hydraulic machine which derives its energy from the passage of water from a reservoir of high altitude to a reservoir of lower altitude.

The temperature is an intensive state function used to describe the equilibrium state of a system while heat is a transfer of thermal agitation similar to a quantity of energy, associated with the evolution of a system between two distinct or identical states if the transformation is cyclic.

Let us go back to the kinetic theory of gases; the gases are formed of... 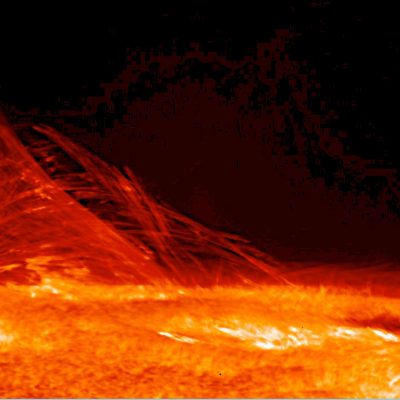 (The Sun, the main source of heat on Earth.) Temperature Temperature is a physical quantity...

Statistical equilibrium can only be established if there is exchange of energy between the resonators,...

Physicists did not at first concern themselves with these difficulties, but two new facts changed...

A thermal transfer, more commonly called heat, is one of the modes of heat energy...