(The beginning of physics in Latin translation in a Venetian incunabulum of 1483 adorned with hand-painted miniatures: New York, Morgan Library & Museum)

Physics is next to the Metaphysics and Nicomachean Ethics of the major works of Aristotle . It deals with the explanation (definition) of some basic terms that are used in the description of natural processes in daily life. The most important of these are: space, time, movement and cause. It is not a mathematical exposition of the main features of nature in today’s sense.

Chapter I 7 deals primarily with the concept of change. Here, the form (the sum of the properties) can change in matter or matter itself. In addition, Aristotle here anticipates the act-potency theory from metaphysics.

Aristotle understands movement as any kind of change. He therefore sums up the term in a wider sense than is usual today. The movement in this sense can be considered a fundamental concept of physics. He is presented on Chapters III 1-3, V 1-2, and Book VII. Aristotle defines movement as the finite “transition to actuality” of a mere possibility. In Aristotle’s view, any change must already be in the possibilities of the changing thing. If this system is realized, then this is a change. Aristotle himself gives the following example: “If something that can be constructed, insofar as we express that property of it, comes to its final realization, then it is just built, and then this is ‘building'” .

According to Aristotle, all that is “natural”, has in itself a beginning of change and existence. On the other hand there are the manufactured things (artifacts) that are created and maintained by man through art, so that they have no “beginning in themselves”.

The four causes of Aristotle can be thought of as four distinct explanatory patterns that answer why a given thing exists in its particular nature.

A description of the four-cause doctrine can also be found in Aristotle’s Metaphysics, in which he develops, among other things, his philosophy of science.

Aristotle defines time as “the number of motion in terms of ‘before’ and ‘after'”, namely, number in the sense of a divisible variable . The idea behind this is to quantitatively measure changes (eg, the growth of a plant) based on other changes. These second changes are uniform changes of location (today the movement of clock hands, formerly the apparent movement of the sun). In this respect, we can identify there before and after, this is then transferred to temporal processes.

In the last book of physics (Book VIII) and in the run-up to his theology (Book XII of Metaphysics), Aristotle argues for the necessity of a “stationary mover”, that is to say, “in the first place”. A force that causes all movement in the world. This theory later inspired Thomas Aquinas to his so-called cosmological proof of God.

(Arabic manuscript about a machine. Unknown date (estimated: 16th-19th centuries). Mechanics is a branch of... 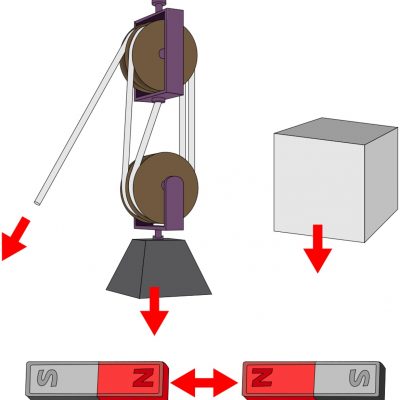 In physics, and more particularly in mechanics, a linear motion is a movement that takes...

The main principles of mechanics Principle of energy conservation For any physical object with...