Newton’s second law (the fundamental principle of dynamics, or the fundamental relation of dynamics) designates a law of physics relating the mass of an object, and the acceleration it receives if forces are applied to it.

We can also see it as arising from the principle of virtual powers which is a dual formulation.

The original statement of Newton’s second law is as follows:

(”The change of momentum of a body is proportional to the impulse impressed on the body, and happens along the straight line on which that impulse is impressed.”)

In its modern version:

”In a Galilean frame of reference, the acceleration of the center of inertia of a system of constant mass m is proportional to the resultant of the forces it undergoes, and inversely proportional to m.”

This is often summed up by the equation: 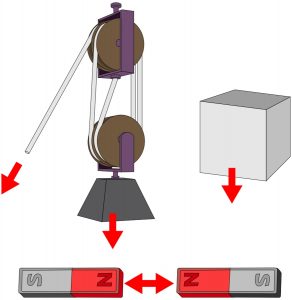 (Forces can be described as a push or pull on an object. They can be due to phenomena such as gravity, magnetism, or anything that might cause a mass to accelerate.)

If the mass does not vary over time, we can reformulate the Newton’s second law as follows: The derivative with respect to time of the momentum of a body is equal to the force applied to it.

The theorem is applicable to any system of constant mass, including one formed from different pieces (subsystems). Then the momentum p is the sum of the momentum of the different subsystems:

We can also write the Newton’s second law in the form:

This allows a graphical translation of the Newton’s second law: if we put the force vectors end to end, we obtain an open polygon (since the sum of the forces is not zero); the vector –ma is the vector which closes the polygon.

Writing the Newton’s second law in this form makes it easier to solve some problems.

This constitutes a particular case of d’Alembert’s principle: since

(The beginning of physics in Latin translation in a Venetian incunabulum of 1483 adorned with hand-painted miniatures:...

(Arabic manuscript about a machine. Unknown date (estimated: 16th-19th centuries). Mechanics is a branch of...

The main principles of mechanics Principle of energy conservation For any physical object with...

In physics, and more particularly in mechanics, a linear motion is a movement that takes...