(Representation of a helium-4 atom with, appearing pink in the center, the atomic nucleus and, in gradient of gray all around, the electronic cloud. The helium-4 nucleus, enlarged on the right, is formed of two protons and two neutrons.)

An atom (ancient Greek ἄτομος [atomos], “non-breaking”) is the smallest part of a single body that can chemically combine with another. Atoms are the elementary constituents of all solid, liquid or gaseous substances. The physical and chemical properties of these substances are determined by the atoms that constitute them as well as by the three-dimensional arrangement of these atoms.

Contrary to what their etymology suggests, atoms are not indivisible but are themselves subatomic particles. Atoms comprise a nucleus, which concentrates more than 99.9% of their mass, around which electrons are distributed, which form a cloud 10,000 to 100,000 times larger than the nucleus itself, so that the volume of an atom, roughly spherical, is almost entirely empty. The nucleus is formed of protons, carrying a positive electric charge, and neutrons, electrically neutral; hydrogen is an exception, because the nucleus of its isotope 1H, called protium, contains no neutron. Protons and neutrons, also called nucleons, are held together in the nucleus by the nuclear bond, which is a manifestation of strong interaction. Electrons occupy atomic orbitals interacting with the nucleus via the electromagnetic force. The electronic cloud is stratified into quantized energy levels around the nucleus, levels that define layers and electronic sub-layers; the nucleons are also distributed along nuclear layers, although a fairly convenient approximate model popularizes the nuclear structure from the liquid drop model.

Several atoms can establish chemical bonds between them thanks to their electrons. In general, the chemical properties of atoms are determined by their electronic configuration, which results from the number of protons in their nucleus. This number, called an atomic number, defines a chemical element. 118 chemical elements have been recognized by the International Union of Pure and Applied Chemistry (IUPAC) since November 18, 2016. The atoms of different elements have different sizes, so generally different masses, although the atoms of a given chemical element may have different masses depending on the isotopes considered. The heavier atoms, or whose nucleus has too much imbalance between the two types of nucleons, tend to become more unstable, and are then radioactive; lead 208 is the heaviest stable isotope.

The atomist theory, which supports the idea of ​​a material composed of indivisible “grains” (against the idea of ​​an indefinitely separable matter), has been known since Antiquity, and was defended by Leucippe and his disciple Democritus, philosophers of ancient Greece, as well as in India, more previously, by one of the six schools of Hindu philosophy, the Vaisheshika, founded by Kanada. It was disputed until the end of the 19th century and has not been questioned since then. Direct observation of atoms became possible only in the middle of the 20th century with transmission electron microscopy and the invention of the tunneling microscope. It is thus on the properties of atoms that all the sciences of modern materials are based, while the elucidation of the nature and structure of atoms has contributed decisively to the development of modern physics, especially quantum mechanics. .

The core, however, concentrates most of the mass of the atom: the nucleus of lithium 7, for example, is about 4,300 times more massive than the three electrons that surround it, the atom of 7Li itself having a mass of the order of 1.172×10-26 kg. To put it in perspective, the mass of atoms is between 1.674×10-27 kg for protium and 3.953×10-25 kg for uranium 238, sticking to the isotopes that have a significant abundance in the natural environment (There are heavier nuclei but also more unstable than the 238U nuclide).

Given their size and their mass singularly reduced, the atoms are always in very large number as soon as one handles a quantity of macroscopic matter. We thus define the mole as the quantity of matter constituted by as many elementary units (atoms, molecules, electrons, etc.) as there are atoms in 12 g of carbon 12, not less than 6,022×1023 elementary units, what is called the Avogadro number.

Although its etymology means “indivisible” in ancient Greek, an atom is actually made up of smaller elementary particles, and can therefore be divided; but it is indeed the smallest indivisible unit of a chemical element as such: by breaking, for example, a helium atom, we will obtain electrons, protons and neutrons, but we will no longer have a simple body having the properties of helium.

Electrons, on the other hand, are leptons, which together with quarks constitute the group of fermions. The big difference between quarks and leptons is that only the first ones know all the elementary interactions, including the strong nuclear interaction, whose mediators are gauge bosons called gluons; the leptons know only the weak interaction (via the Z0 and W+ bosons) and the electromagnetic interaction (via the photons).

All these particles also know a priori gravitational interaction, but the latter has not yet been integrated into the standard model of particle physics; its intensity on the atomic scale is, in any case, insignificant compared to the intensity of the other three interactions.

(Schematic representation of a potential well. The energy V(x) required to occupy each x-coordinate confines to the interval [x1, x2] any particle provided with the energy E on the axis.)

The atomic nucleus being positively charged, it forms a potential well for the electrons, which are negatively charged. This potential well consists of energy levels defined by quantum numbers whose combination determines atomic orbitals conferring on the corresponding wave functions dimensions and characteristic shapes.

Introduction to the Schrödinger model

The electron manifests, like any quantum object, a wave-particle duality, by virtue of which it behaves sometimes like a geometrically delimited particle occupying a determined position, sometimes like a wave likely to present, for example, phenomena of interferences. These two aspects of the electron coexist in the atom, although the Schrödinger model is exclusively undulatory:

Therefore, an electron can not “fall on the nucleus” as an object falls to the ground, as this would mean that the spatial extension of its wave function would be reduced to a point, which is not the case of no eigenfunction of the Schrödinger equation: the latter requires, on the contrary, that an electron, in the vicinity of the nucleus, be “diluted” in a volume (an orbital) to the geometry determined by the quantum numbers which satisfy this equation. We can therefore consider that an electron in an atom has already fallen on the nucleus, insofar as it is confined in its vicinity by the electrostatic potential well.

Moreover, the wave function of an electron is not zero inside the nucleus, although its probability of being there is small, because the nucleus is of very small size compared to that of the atomic orbitals . The possible wave functions for the electrons of an atom being centered on the nucleus, we can thus say that the electron has in fact fallen into the nucleus, although it is there only very rarely: from the quantum view point, several particles can indeed occupy the same space by virtue of their wave nature. An imaginary – but approximate – way of seeing things is to imagine, by analogy, that the wave function of the electron would be as “diffracted” by the atomic nucleus, which would give it different forms, depending on its quantum state , by which the probability of the presence of the electron reaches its maximum in certain zones more or less distant from the nucleus – typically, several tens of thousands of times the nuclear radius.

Protons and neutrons form an atomic nucleus of femtometric size. The nuclear radius of an atom whose mass number is A is about 1.23√A fm, while the atom itself has a radius of the order of a hundred picometers (about 35,000 to 40,000 times bigger). The protons being positively charged, they repel within the nucleus, but the intensity of this electrostatic repulsion is much lower than that of the attraction between nucleons induced by the strong nuclear interaction at distances less than 2.5 fm.

The geometry of atomic nuclei is generally spherical, although some sufficiently massive stable nuclei also adopt spheroidal shapes drawn into a rugby balloon or, on the contrary, flattened. Some unstable nuclei, known as halo nuclei, are characterized by one or more nucleons with very distended wave functions, which give the nucleus fuzzy outlines and a much increased apparent volume; these nuclei have a nuclear cohesion at the extreme limit of the field of action of the strong interaction.

In the liquid drop model, the protons tend to repel each other and, consequently, to concentrate outwards from the nuclei (at the “poles” or at the “equator” in the case of spheroids) , while neutrons tend to accumulate in the center of the nucleus. Dozens of models have been proposed to explain experimental data on the nature and structure of atomic nuclei, but none to date is sufficient to account for all observations.

The nuclear volume, estimated experimentally by electron beam diffraction techniques, corresponds roughly to the stacking of hard spheres representing the nucleons, with a constant nuclear density, which is very well conceptualized with the model of the liquid drop. Nevertheless, some quantum properties of the nuclear structure seem better described by the layered model, developed by German physicists Maria Goeppert-Mayer and Hans Daniel Jensen, who won the Nobel Prize for Physics in 1963 for this breakthrough. Their model considers the nucleons as fermions subject to the Pauli exclusion principle and distributed on quantified energy levels – the “nuclear layers” – similar to the electrons at the atomic scale. In the nucleus, protons and neutrons constitute two distinct fermion populations with respect to the Pauli exclusion principle.

The saturation of a nuclear shell confers to the atomic nucleus a stability superior to that calculated by the Weizsäcker formula, resulting from the model of the liquid drop – which is not unlike the chemical inertia of the rare gases, characterized by the saturation of their peripheral electronic sub-shell. The number of nucleons of a given population corresponding to the saturation of a nuclear shell is called the “magic number”; the nucleus of the lead 208, which is the heaviest of the stable isotopes, thus consists of 82 protons and 126 neutrons: 82 and 126 are two magic numbers, which explains the stability of this nuclide compared to those which do not differ from it than with one or two nucleons. 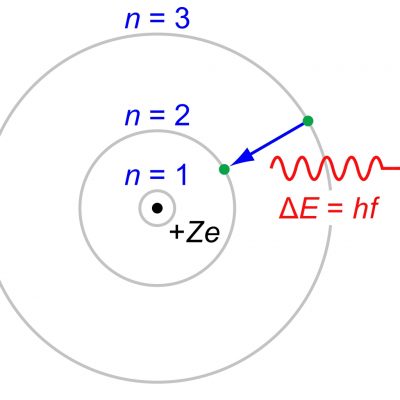 Atomic physics is the field of physics that studies atoms as isolated systems that include...