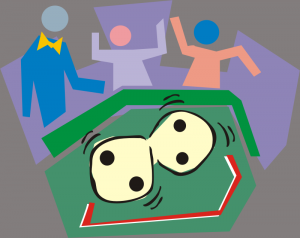 Boxcars is the outcome of rolling the dice in a game of craps and getting a 6 on each die. The pair of 6 pips resembles a pair of box cars on a freight train. In modern parlance, it refers to such a roll in any game involving 6 sided dice which are marked with pips. The probability of this roll is 1 in 36, or about 2.8%. One of the 4 bets on any common craps table. It is on the ‘high side’ of the horn bet in which the player can either bet on the 2,3,11, or 12. When the player throws in money and calls out “midnight” or “Boxcars”, the dealer will usually ‘book’ the bet as a bet on the 12, so as to not create confusion.

The gambler’s fallacy is a logical fallacy that mistakenly believes past events will affect future...

In gambling jargon, a holdout is any of numerous accessories used by cheats to help...