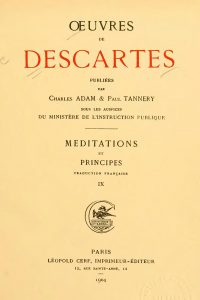 In the first, I put forward the reasons why we can generally doubt all things, especially material things, at least as long as we have no other foundations in the sciences, than those we have had until now. Or, although the usefulness of a doubt so general does not appear at first, it is nevertheless very great in this, that it delivers us with all kinds of prejudices, and prepares us a very easy way to accustom our minds to detach oneself from the senses, and finally, in that it makes it possible that we can no longer have any doubt, of what we will discover after being real.

In the second, the mind, which, using its own liberty, supposes that all things are not of the existence of which it has the least doubt, recognizes that it is absolutely impossible that, however, it does not even exist. This is also very useful, especially since by this means it makes an easy distinction between things which belong to it, that is to say, intellectual nature, and those which belong to the body. But because it may happen that some of them expect from me in this place the reasons for proving the immortality of the soul, I consider it my duty now to warn that having endeavored not to write anything in this treaty, of which I did not have very exact demonstrations, I saw myself obliged to follow an order similar to that which the geometers use, namely, to advance all the things on which depends the proposition which one seeks, before that of to conclude nothing.

But the first and principal thing that is required before knowing the immortality of the soul is to form a clear and net conception of it, and entirely distinct from all the conceptions one may have of the body. which was done in this place. In addition to this, it is necessary to know that all the things we clearly and distinctly conceive of are true, according as we conceive them: which could not be proved before the fourth Meditation. Moreover, one must have a conception distinct from the corporeal nature, which is formed, part in this second, and part in the fifth and sixth Meditation. And finally, it must be concluded from all this that things which are clearly and distinctly conceived to be different substances, as the mind and the body are conceived, are in fact various substances, and really distinct from each other: and this is what we conclude in the sixth Meditation. And in the same way it is confirmed, because we conceive of no body except as divisible, whereas the mind, or the soul of man, can only be conceived as indivisible: for, indeed, we can not conceive half of any soul, as we can do of the smallest of all the bodies; so that their natures are not only recognized as diverse, but even in some other way. But they must know that I have not undertaken to say anything more in this treatise, because it suffices to show clearly enough that from the corruption of the body the death of the soul does not follow, and so to give men the hope of a second life after death; as also because the premises from which one can conclude the immortality of the soul, depend on the explanation of all physics: first, in order to know that generally all substances, that is to say all things that can not exist without being created of God, are of their incorruptible nature, and can never cease to be, if they are not reduced to the naked by that same God who wants them to deny his ordinary help. And then, so that we notice that the body, taken in general, is a substance, that is why it does not perish; but that the human body, in so far as it differs from other bodies, is only formed and composed of a certain configuration of limbs, and other similar accidents; and the human soul, on the contrary, is not so composed of any accident, but is a pure substance. For although all her accidents change, for example, that it concocts certain things, that it wants others, that it feels others, etc., it is nevertheless always the same soul; instead that the human body is not the same, only that the figure of some of its parts is changed. From which it follows that the human body can easily perish, but that the mind, or the soul of man (which I do not distinguish), is immortal in its nature.

In the third Meditation, it seems to me that I have explained sufficiently long the main argument I use to prove the existence of God. However, in order that the mind of the reader could no longer be abstracted from the senses, I did not wish to use in this place any comparisons drawn from corporeal things, so that perhaps he remained there a great deal of obscurities, which, as I hope, will be wholly cleared up in the answers which I have given to the objections which have since been proposed to me. As, for example, it is rather difficult to understand how the idea of ​​being supremely perfect, which is in us, contains so much objective reality, that is, participates by representation in so many degrees of being and of perfection, that it must necessarily come from a supremely perfect cause. But I have clarified it in these answers, by the comparison of a very artificial machine, the idea of ​​which is found in the mind of some worker; for as the objective artifice of this idea must have some cause, namely the science of the workman, or of some other from which he has learned it, so it is impossible that the idea of ​​God, who is in us, do not have God even for his cause.

In the fourth, it is proved that the things we conceive very clearly and distinctly are all true; and together is explained what constitutes the reason for the false error: what must necessarily be known, both to confirm the preceding truths, and to better understand those which follow. But it must be remarked, however, that I do not deal in this place with sin, that is, with the error that is committed in the pursuit of good and evil, but only with that which happens in judgment and discernment of truth and falsehood; and that I do not intend to speak of things which belong to faith, or to the conduct of life, but only to those which look at truths speculative and known by the help of the only natural light.

In the fifth, besides the fact that the bodily nature taken in general is explained, the existence of God is still demonstrated by new reasons, in which however some difficulties may be encountered, but which will be resolved in the answers to the objections which have been made to me; and also it is possible to discover what kind of truth it is, that the certainty even of geometric demonstrations depends on the knowledge of a God.

Finally, in the sixth, I distinguish the action of the understanding from that of the imagination; the marks of this distinction are described therein. I show there that the soul of man is really distinct from the body, and also what is so closely conjoint and united to it, that it composes only one thing with it. All the errors that make sense are exposed, with the means of avoiding them. And finally, I bring all the reasons for which one can conclude the existence of material things: not that I consider them very useful to prove what they prove, namely, that there is a world, that men have bodies, and the like, which have never been doubted by any man of good sense; but because, when we consider them closely, we come to know that they are not so sure or so obvious as those which lead us to the knowledge of God and of our souls; so that these are the most certain and most obvious that can fall into the knowledge of the human mind. And that is all I have been planning to prove in these six Meditations; so that I omit many other questions, of which I have also spoken by occasion in this treatise. 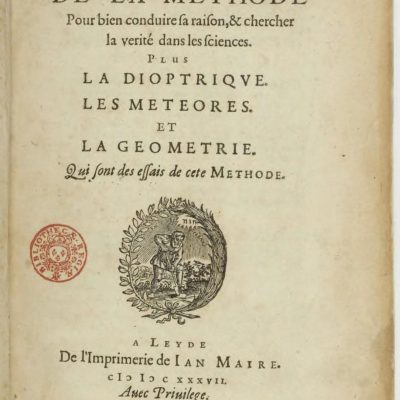 Common sense is the best shared thing in the world; for every one thinks that...