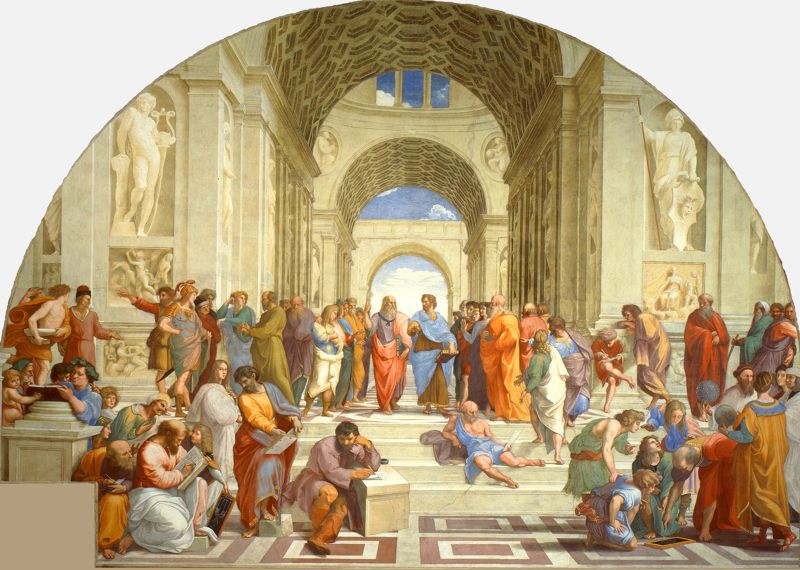 (Famous representation of the different schools of antiquity: it is recognized, in center, Plato pointing the finger of heaven (referring to his theory of Ideas) and Aristotle showing opposed the land (referring to his desire to anchor knowledge in the review of empirical facts). Detail of a fresco of Raphael (c. 1511).)

The history of philosophy is the history of theories and doctrines that have been made by philosophers throughout the ages. The first historical traces of what is called the philosophy appear in the West in ancient Greece, with the pre-Socratic thinkers, and Socrates, considered the true father of this discipline, and those who followed his wake (Plato, Aristotle, the Socratic schools). The discipline is pursuing its development in the Hellenistic period, especially Stoicism, Epicureanism, cynicism and skepticism, wisdoms that extend into Roman times. From late antiquity and the early Middle Ages, Platonism and Christian philosophy establish a bridge between philosophy and religion, and it is closely linked with theology and Greek-Arabic philosophy that develops medieval philosophy, as evidenced by the importance of scholastic at the time.

In modern times, the humanism of the Renaissance and the rediscovery of the Ancients sign the early modern era, when philosophers take into account the development of modern science to propose a new approach of epistemological and political problems in particular. Many traditional branches of philosophy at that time take their independence to become full-fledged science. The Enlightenment, when philosophers contribute to reducing obscurantism and tyranny (encyclopaedists, liberalism, republicanism), marks the end of the modern period.

The history of philosophy begins in the West in the world of Greek antiquity, to the seventh century BC. Before the word “philosophy” is in use and designated thereafter a separate discipline, it is considered that the intellectual approach of generations of thinkers called “pre-Socratic”, mainly studying physics, marks a break with the mythological, religious and poetic speech that existed previously, and form as such the birth of Western philosophy. In Athenian democracy in the fifth century BC, Socrates will revolutionize the approach and introduce methods that will remain those of philosophy, centering his thoughts on human issues, not on physics, and spreading the use of dialectics and study of definitions. This is Plato in his famous dialogues, which should have transmitted the legacy of Socrates and popularized the word “philosophy”, conceived as a search for truth. Socrates is presented as opposed to the misleading discourse of prestigious sophists, skilled speakers and experts in the art of persuading the crowds, although fallacies are stated in certain dialogues without that Socrates was offended.

The philosophy then develops along several areas of study, as a meditation on the nature of the human soul, ethics, politics, and knowledge. Aristotle, student of Plato, continue and sometimes contradict this research and lay the foundations of several sciences, such as logic (science reasoning) and zoology (the study of animal species). From its Greek origin, philosophy has thus bound up with different sciences, which then become independent over history, earning the name of mother of sciences. It also reflects on the nature of reality or of being itself (ontology), which will become an important branch of philosophy, metaphysics. Ethical reflections of elders, continued in the Hellenistic period by Epicurean and Stoic schools, that will continue in Roman times, mainly focus on controlling desires and passions, offering an ideal of wisdom to lead a happy life.

At the end of Antiquity, the thesis of Plato, and especially those of Aristotle, dominate philosophical thought, which often seek to reconcile them with Christianity, Islam or Judaism as St. Augustine and the Neoplatonists in late antiquity. In the Middle Ages, it is mainly in monasteries and in close connection with the theology that deploys philosophical discourse, through translation and discussion of the writings of the ancients, in the Christian world and the Arab world. Thus scholasticism, applying Aristotelianism to Christianity, introduced by Thomas Aquinas, which is the dominant philosophical approach in medieval Europe

European philosophers rediscover the elders at the vast humanist renaissance, thanks in part to refugees scholars of Byzantium. A new political philosophy, cynical or realistic from the point of view of each, appears with Machiavelli ( “The Prince is always right as long as it succeeds”), and Hobbes, who gets the famous “Man is a wolf for the man”. Thinkers are based, from the seventeenth century, on the methods of modern science now emerging (with Copernicus, Galileo and Newton), to develop a philosophy more focused on the subjectivity of the individual, placed now at the center construction of knowledge (Descartes, Locke, Kant). Philosophers are often great scientists (Pascal, Leibniz, Descartes), who can not conceive separately philosophy of science, or reflections on religion. Various currents opposed to the nature of ideas and human knowledge, such as nativism and rationalism (Leibniz, Malebranche) against empiricism (Locke, Berkeley, Hume).

This is also the time when metaphysics, the Church and the Monarchy will undergo critical of the Enlightenment (eighteenth century), Kant ruining the scientific pretensions of the first in his studies on the limits of human reason, and other philosophers harnessing fight obscurantism and tyranny by the encyclopaedist project (Diderot, d’Alembert) on one hand, and political treaties recommending liberalism, tolerance (Locke, Voltaire) and republicanism (Rousseau) on the other. Moreover, from the eighteenth century, philosophy detaches gradually positive sciences, several of its branches became independent disciplines (and political science, mathematical logic and biology).

In the Romantic era, German idealism (Hegel, Fichte, Schelling) deepens the thought of Kant, by bringing a systematic philosophy reconciling natural philosophy and moral philosophy. However, in an era increasingly marked by scientific advances and the idea of progress dear to the Enlightenment, positivism (Comte) will make its appearance, condemning metaphysics for the benefit of science; Comte also invented a new science of sociology. Advances in experimental method also enable a significant branch of philosophy takes to turn his life: psychology. With the industrial revolution of the nineteenth century, it is a set of common ideas more focused on the economy and politics that are emerging, such utilitarianism (Bentham, Mill), pragmatism (Peirce, James) and socialism (Proudhon, Marx). The late nineteenth century was marked by thinkers who radically upset the old doctrines (Nietzsche, Marx, Freud).

In the twentieth century, a major school of thought emerged: phenomenology (Husserl). This line of thinking, which influences structuralism (Prague Circle, Levi-Strauss), deconstruction businesses (Heidegger, Derrida), the hermeneutic tradition (Ricoeur, Foucault) and existentialism (Sartre), forms with them that today is called the “continental philosophy”. Usually opposes it to the other great current of thought of the twentieth century, rather from the Anglo-Saxon world: “analytic philosophy” (Russell, Wittgenstein, Quine), based on logic tradition and language analysis.

(The philosopher, by Rembrandt.) The challenge of philosophy is considerable because it deals with central...