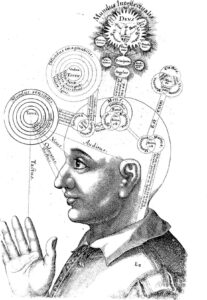 (Representation of faculties of the human mind.)

In many religious traditions, it is a principle of the intangible life of the human being. In philosophy, the notion of spirit is at the heart of so-called spiritualist traditions. In this sense, one opposes body and spirit (which is more often called conscience by philosophy and soul by certain religions). In contemporary psychology, the term becomes synonymous with all human mental activities, conscious and non-conscious.

The mind in religions

The mind in Christianity

In his first letter to the Thessalonians, Paul of Tarsus prayed that our “whole being, mind, soul, and body” should be kept without reproach at the coming of the Lord (1Th 5, 23).

The Catholic Church teaches that the distinction between soul and spirit does not introduce a duality into the soul. In the ninth century, at the fourth council of Constantinople in 869, there was a controversy over the relationship between soul and body. The 11th canon of this council affirmed the uniqueness of the soul.

It is thus in the ninth century that we formalize the distinction between soul and mind. The mind being traditionally associated with thought and the soul with feeling, it was previously considered that man could have a multiple nature (body, soul and mind). On the contrary, Christianity affirmed the unity of the human person (one of body and soul) by denying the existence of the mind, because it is confused with the soul:

“The unity of the soul and the body is so profound that one must consider the soul as the form of the body; that is to say, it is thanks to the spiritual soul that the body constituted of matter is a living human body; spirit and matter, in man, are not two united natures, but their union forms a unique nature.” (Catechism of the Catholic Church)

The Roman Catholic Church therefore sought to deepen the meaning of the terms, which did not go without controversy between the Church of Rome and the Eastern Churches. In the Catechism of the Catholic Church, the notion of soul is attached to an individual (unity of the human person and soul), while the mind is also considered from a collective angle:

“The sacred heritage of faith (depositum fidei), contained in Holy Tradition and Sacred Scripture, has been entrusted by the apostles to the whole Church. By attaching himself to him, the entire holy people united with their pastors, remain steadfastly faithful to the teaching of the apostles and to the fraternal communion, the breaking of the bread and the prayers, so that in the maintenance, the practice and the confession of faith transmitted, is established, between pastors and faithful, a singular unity of spirit.”(Catechism of the Catholic Church)

This is particularly well revealed in the introduction of the encyclical Fides and ratio:

“Faith and reason are like the two wings that allow the human mind to rise to the contemplation of truth. It is God who has put in the heart of man the desire to know the truth and, in the end, to know Him Himself so that, knowing Him and loving Him, He can reach the full truth about Himself.”

The word “mind” appears very often in this encyclical, whereas the word “soul” appears only five times.

The mind in the Kabbalah

Jewish mysticism, since the second century, considers that man possesses, in addition to the physical body, several souls. The Jewish neo-Platonists Abraham ibn Ezra (around 1150) and Abraham Bar Hiyya Hanassi distinguish three parts: nefesh, ru’ah, neshamah; the Kabbalists add hayyah, yehidah. The five names of the soul are, in ascending order: nefesh (“vitality”, “corporeal double”), ru’ah (“breath”, the “personality”, the anima), neshamah (“the divine perfume”, “superior soul”, “divine spark”, “spiritus”), hayyah (“divine life”, equivalent to the Buddhi) and yehidah (“union”, “uniqueness”,  indivisible principle of individuality ). If we group in an acronym the initials of each of these terms we obtain the word naran-hai, (“the Living Fire”). This is the doctrine of Kabbalist Isaac Louria, around 1570, in Safed.

The mind in Buddhism

Buddhism denies the existence of the soul (considered as an illusion), and insists on the profound interdependence between body and mind. The individual is considered as a set of aggregates, the first of which is the body, accompanied by 4 other concepts that can be related to the notion of mind: sensations, perceptions, volitional formations and consciousness. These aggregates are impermanent and interdependent processes, not immutable objects. The mind is bound to the body and becomes truly independent only in the sublimated states of meditation that are the dhyānas in view of nirvāna.

The mind is considered, not as a “ghost in the machine” of the body, but as a sixth sense (manas) in addition to the five usually recognized senses. Buddhism is neither spiritualistic nor materialistic: the mind is not an eternal entity, nor is it an epiphenomenon of matter. The brain is only a kind of “terminal” that operates the interface between the (immaterial) mind and the world of the five senses (material). Experiences of altered states of consciousness, common among advanced meditators, seem to confirm this conception. Ajahn Brahm explains:

“The highest level of consciousness escapes the material support. Consciousness is independent of physical particles.“

The fundamental functioning of the mind and its conditioning in saṃsāra are described by the causal chain of conditioned co-production. Some schools, such as the Cittamātra School, teach an unconscious aspect of the mind, Ālayavijñāna.

The mind in philosophies

In the seventeenth century, Descartes separated the body of the mind (which it identifies with the soul) into a dualism: the body is an extended substance and belongs to mechanics (hence the theory of animal-machines), while the soul is a thinking substance. As a passive, the mind is intellect; as an asset, he is will. The unity of the two remains a thorny problem, and Descartes sees in the pineal gland the place of communication between the two. More simply, Descartes breaks down the spirit into 3 components: thought, imagination and memory.

On the other hand, the proponents of philosophical materialism reject the existence of an immaterial principle and the mind is conceived as the manifestation of physiological phenomena governed by the laws of physics: “the brain secretes thought as the liver secretes bile” (Pierre-Jean-Georges Cabanis, 1802).

Philosophy of the contemporary mind

The generalization of the monistic naturalist paradigm in the sciences of the mind, now known as cognitive science, often leads today to put between the brain and the mind the same type of relationship as between the material ( “hardware”) and software in computer science.

This so-called metaphor of the brain-computer also knows its opponents, those who refuse to see in mind only an epiphenomenon of neurobiology, opposing the optimism of those for whom the field of “this which remains to be explained in the functioning of the mind” is finite and narrows from year to year.

Spiritualism is defined as a spiritual philosophy and places the notion of the mind at the heart of it. For this doctrine, the mind is the intelligent principle of the universe, whose true nature remains to be discovered. In the spiritist doctrine sense, minds are the intelligent beings of creation, who inhabit the universe outside the material world, and who constitute the invisible world. They are not beings of a particular creation, but the souls of those who have lived on earth or in other spheres, and who have left their corporeal envelopes.

The mind in science

By etymology, psychology is the science of the mind. But in the face of the religious and mystical connotations of the word, scientific discourse preferred to use more neutral terms such as those of faculties or mental processes or even psyche (especially in psychoanalytically inspired approaches) or cognition. In contemporary cognitive science, the term cognition refers not only to the faculties of knowledge and intelligence of thought, but to all the psychological processes at work in the human (and non-human) mind, including perception, motivation, decision or emotions …