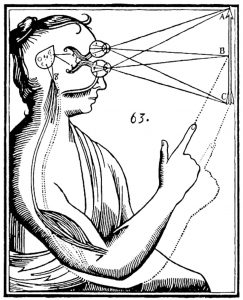 (Illustration of dualism by René Descartes. Sensory inputs are transmitted by the sensory organs to the pineal gland in the brain, then to the immaterial mind.)

Dualism refers to a view of the mind-matter relationship based on the claim that mental phenomena have characteristics that are beyond the scope of physics.

These ideas first appear in Western philosophy with the writings of Plato and Aristotle, who assert that man’s “intelligence” (a faculty of the mind or the soul) cannot be assimilated nor explained by its material body. However, the first use of the term in this sense dates only from the first half of the 18th century and appears from the pen of Christian Wolff (1670-1754).

The best-known version of dualism was formalized in 1641 by René Descartes who argued that the mind was an immaterial substance. Descartes was the first to clearly assimilate mind to consciousness, and to distinguish it from the brain, which according to him is the support of intelligence. Thus, he was the first to frame the mind / body problem as it is presented today. Today, dualism is opposed to various forms of monism, among which is physicalism and phenomenalism. Substance dualism is opposed to all forms of materialism, while property dualism can be seen as a form of emergent materialism, and would then be opposed to non-emergent materialism.

History of dualism in philosophy 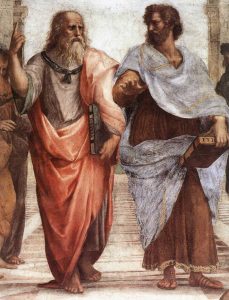 (We often contrast, in a caricatural way, the idealism of Plato to the alleged materialism of Aristotle (the latter rather defends a hylomorphism), as evidenced by the gesture of each of the two philosophers in this detail of a fresco by the painter Raphael (around 1510).)

In his dialogue Phaedo, Plato formulates his famous conception of Eternal Forms as distinct and immaterial substances of which the objects and other phenomena that we perceive are only shadows. Plato’s idea became the starting point for all subsequent formulations of what is today called dualism of substance in ontology. But this conception should not be seen as an old and outdated metaphysical notion because it entails precise and undeniable consequences for the philosophy of the mind, in particular for the body-mind problem.

Plato clearly explains in the Phaedo that the Forms are the universalia ante rem, that is, they are universal concepts (or ideas), making the whole phenomenal world intelligible. Therefore, in order for the intellect (the most important aspect of the mind in philosophy until René Descartes) to have access to any form of knowledge relating to any aspect of the universe, it is necessary that ‘it is itself an intangible entity (or the property of such an entity). Thus, it is clear from these texts that Plato was a very far-sighted precursor of Descartes and later and more rigorous formulations of the concept of substance dualism.

Aristotle subsequently rejected Plato’s notion of Forms as independently existing entities, but maintains many aspects of idealism, for example for the division of substance from accident. In his book Metaphysics, he already points out the central problem of this idea: on the one hand, if we say that each particularity of the phenomenal world participates or is included in the Forms, we seem to destroy the essential and indispensable unity of Form. On the other hand, if we say that the features are only similar, or are copies of the Shapes, then we need additional Shapes to explain the connection between the members of the class consisting of the features-and-forms, and so on, leading us into infinite regression. This is what Aristotle called the “third man” argument.

It is for these reasons that Aristotle revised the theory of Forms in order to eliminate the idea of ​​their existence independent of particular concrete entities. The form of a thing, for Aristotle, is the nature or essence (from the Greek ousia) of that thing. To say that Socrates and Callias are both men does not mean that there is a transcendent “man” entity to which Socrates and Callias both belong. Form is substance, but it is not substance beyond the substance of the concrete entities it characterizes. Aristotle rejects both the universalia in rebus and the universalia ante rem. Some philosophers and thinkers have regarded this as a form of materialism, not without reason. However, what is important from the point of view of cognitive philosophy is the fact that Aristotle does not believe that the intellect can be conceived as something material. His reasoning is this: if the intellect was material, then it could not include all forms. If the intellect were a specific material organ (or part of such an organ), then it would be limited to receiving only certain types of information, in the same way that the eye is limited to receiving visual data and the ear, auditory data. Since the intellect is capable of receiving and emulating all forms of data, it cannot be a physical organ, and therefore it can only be immaterial.

Early Christianity seems to have struggled to come to a unique position on the question of the mind-body relationship, just as it struggled to define the ontological status of Christ. Consensus seems to have emerged around what is now called Neoplatonism in the early Middle Ages. The doctrines related to Neoplatonism are essentially minor modifications of Plato’s general idea about the immortality of the soul and the nature of Forms. Neoplatonic Christians equated Forms with souls, and believed that the soul was the substance of every human being, while the body was but a shadow, or a copy of his eternal phenomena.

The philosophers then continued in the neo-Aristotelian perspective traced by Thomas Aquinas, developing a tripartite notion of forms, thus drawing a parallel with the Trinity constituted by the Father, the Son and the Holy Spirit: the forms, the intellect and the soul were the three aspects or parts of the same singular phenomenon. For Thomas Aquinas, the soul (or the intellect) was always the substance of the human being, but, in a way similar to what Aristotle had proposed, it is only through its manifestations. in a human body that a person could acquire the status of a human being. While the soul (intellect or form) could exist independently of the body (contrary to what Aristotle asserted), the soul itself did not constitute a person. Thus, Thomas Aquinas suggested that we say “the soul of St Peter prays for us” rather than saying “St Peter prays for us”, since all that remained of St Peter after his death, was his soul. All things related to the body, such as individual memory, were erased with the end of one’s bodily existence. Different views exist on this question in modern Christianity. The official doctrine of the Catholic Church, as illustrated by the Symbol of the Apostles (Creed), states that at the second coming of Christ to Earth, the soul is reunited with the body in the resurrection, and the whole person entire body (body and soul) then leaves for Paradise or Hell. Thus, there is a kind of inseparability of soul, spirit and body, which seems even closer to Aristotle than the positions expressed by Thomas Aquinas. Some theologians do not accept this doctrine and insist that only the immaterial soul (and therefore the spirit or intellect with it) leaves for Paradise, leaving the body (and the brain) behind forever. .

Descartes and his disciples

(A schematic view of occasionalism, a theory of causation that emerged as a solution to the problem of interactionism resulting from Cartesian dualism. )

In his Meditations on First Philosophy, Descartes embarked on a quest in which he undertook to doubt everything he believed in, in order to find out what he could be certain of. As he did this, he discovered that he could doubt whether or not he had a body (it could be that he was just dreaming about his body, or that it was just an illusion created by an “evil genius”), but he could not doubt the existence of his spirit. This was the first clue for Descartes that the body and the mind were two really different things. The mind, according to Descartes, was a “thinking thing” (from the Latin res cogitans), and an immaterial substance. This “thing” was the essence of his person, the one who doubted, believed, hoped, and thought. This distinction between body and mind is thus substantiated in Meditations VI: “I have a clear and distinct idea of ​​myself, as I am only a thinking thing and not extended, and [… ] I have a distinct idea of ​​the body, insofar as it is only an extended thing which does not think.” “All the things that I see clearly and distinctly can be produced by God as I see them.” So, explains Descartes, the mind is a thinking thing that can exist independently of its extended body. And therefore, the mind is a substance separate from the body, a substance whose essence is thought.

The central assertion of Cartesian dualism is that the intangible mind and the material body interact causally, an idea that continues to appear favorably in many non-European philosophies. Mental events cause physical events, and vice versa. This leads to a very deep problem regarding Cartesian dualism: How can an immaterial mind cause anything in a material body, and vice versa? This has often been called the “problem of interactionism“.

Descartes himself struggled to get a coherent answer to this problem. In his letter to Princess Elisabeth of Bohemia, he suggested that the spirits of animate beings interact with the body through the pineal gland, a small gland in the center of the brain, between the two hemispheres. However, this explanation was not satisfactory: How can an immaterial mind interact with the material pineal gland? Given the difficulty in defending Descartes’ theory, some of his followers, such as Arnold Geulincx and Nicolas Malebranche, offered a different explanation: all body-mind interactions required direct intervention from God. According to these philosophers, the different states of mind and body consisted only of the occasion of such intervention, and not its cause. These occasionalists maintained this thesis that all causality was natural except that linking body and mind. 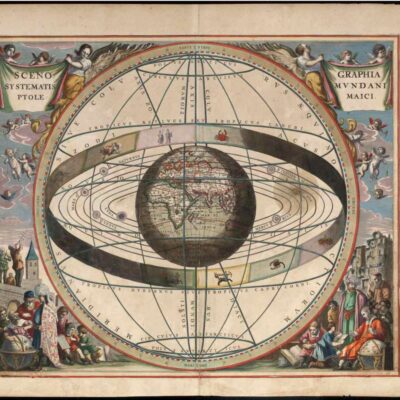 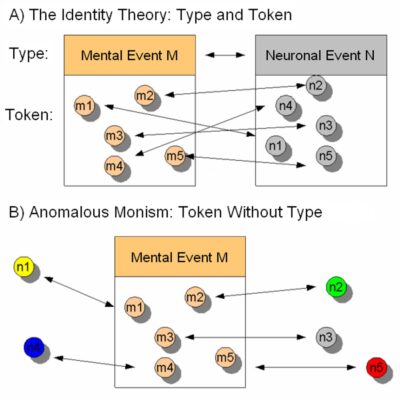 The anomalous monism is a position of the philosophy of mind developed by Donald Davidson (1917 to 2003). On the...