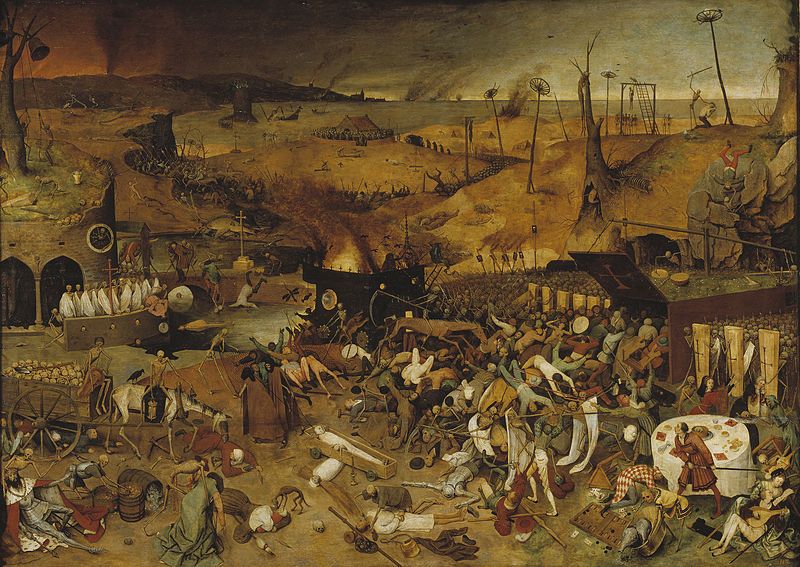 The Triumph of Death, painting of Pieter Bruegel the Elder (1562)

In paleontology, the discovery of funeral rites is an important factor in determining the degree of social awakening of a hominid.

This awareness of death is an engine of social cohesion (uniting to resist disasters and enemies) and action (to do something to leave a trace). It is an important element of metaphysical reflection. This is also what gives the symbolic power to acts such as homicide and suicide.

The Enlightenment in Europe, prompting the mastery of nature, suggests the emergence of a rule of the degradation of the body of man.

According to Plato, death is the separation of soul and body. Finally freed from his fleshly prison, the immortal soul can freely reach the sky of Ideas, Eternity, the domain of philosophers. (cf. Phaedo)

According to Epicurus, death is nothing because “as we exist death is not, and when death is we are not. Death is, therefore, no relation either to the living or to the dead, given that it is nothing for the former, and the latter are not.” (Letter to Menoeceus).

Jankélévitch, in Death, itself offers a reflection on the death from a grammatical point of view: “Death in the third person is the death – in – general, abstract and anonymous death” ( this is the impersonal death), “the first person is certainly a source of anxiety […] In first person, death is a mystery for me and my very intimately, that is to say, in my nothingness” (the death of the “I”), “there is the intermediate and special case of the second person; between the death of another, which is far and indéfférente, and death-esteem, which is even our being, there is a proximité of the death of close”(this is the death of “you”).