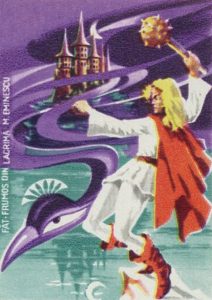 In ancient times, when people, as they are today, were only in the germs of the future, when God was still treading with his holy feet the stony deserts of the earth, – in ancient times lived a thoughtful and dark king like midnight, and had a young empress as smiling as the bright core of the day.

Fifty years had passed since the emperor had started a war with a neighbor. The neighbor had died and left the hatred and enmity of blood to his sons and grandsons. Fifty years, and only the emperor lived alone, like an aged lion, weakened by struggles and sufferings – an emperor who in his life had never laughed, who smiled neither at the innocent song of the child, nor at the loving smile of his young wife, nor to the old stories and jokes of the soldiers bleached in battle and need. He felt weak, he felt dying, and he had no one to leave the legacy of his hatred. Sadly, he rose from the royal bed, beside the young empress — a gilded bed, but deserted and unblessed — going sadly to war with an untamed heart, and his empress, left alone, wept with tears of widowhood for her loneliness. Her most beautiful gold-yellow hair fell on her round white breasts, and streams of watery pearls flowed from her blue and large eyes on a face whiter than the lily’s silver. Long eggplant circles drew around her eyes, and blue veins drew on her white face like a living marble.

Raised from her bed, she threw herself on the stone steps of a vaulted wall, in which she watched, above a smoking candle, the silver-clad icon of the Mother of Sorrows. Bent by the kneeling prayers of the empress, the eyelids of the cold icon became wet and a tear ran from the black eye of the Mother of God. The empress rose to her great stature, touched the cold tear with her dry lip, and sucked it into the depths of her soul. From that moment she became pregnant..

A month passed, two passed, nine passed, and the empress made a boy as white as milk foam, with dull hair like the moon’s rays.

The emperor had smiled, the sun had smiled in his fiery kingdom, he even stood still, so that for three days it was not night, but only serenity and joy – the wine flowed from the broken barrels and the chiots split the vault of heaven.

And his mother named him: Prince Charming from the Tear. And he grew and grew like the fir trees. He grew in a month as much as others in a year.

When he was old enough, he ordered an iron mace to be made for him, threw it up to split the canopy of the sky, caught it on his little finger, and the mace broke in two. Then he ordered for a harder one — threw it up near the palace of clouds of the moon; falling from the clouds, it did not break on the strong young man’s finger.

Then the Prince Charming said goodbye to his parents, so that he could go and fight alone with the army of the emperor who hated his father. He put on his royal body shepherd’s clothes, a gossamer shirt, woven in his mother’s tears, a proud hat with flowers, ropes and beads broken from the necks of the empress girls, he put in his green belt a song pipe and a dance pipe, and, when the sun was two spears in the sky, he went out into the wide world.

On the way, he sang from his pipes, and threw his mace to split the clouds, so that it would fall away all day long. The valleys and mountains were amazed at his songs, the waters lifted up their waves to hear him, the springs troubled their depths, to throw out their waves, so that every wave to hear him, each of them to be able to sing like him when they whisper to valleys and flowers.

The rivers creaked below the belts of the melancholy cliffs, they learned from the emperor shepherd the song of loves, and the eagles that are silent on the dry and gray ridges of high cliffs, learned from him the weeping cry of mourning.

They were all amazed as the young emperor shepherd passed by, mourning and dancing; the girls’ black eyes filled with tears of longing; and in the breasts of the young shepherds, propped up with an elbow of a rock and a hand on the stick, sprang a deeper, darker, greater longing — the longing for strength.

All stood still, only the Prince Charming always walked, watching with his song the longing of his heart, and with his eyes the mace, which shone through the clouds and through the air like a steel eagle, like a wild star.