The exact history of human interaction with cats is still somewhat vague. The earliest written records of attempts to domesticate cats date back to ancient Egypt, circa 4000 BC, where cats were employed to keep mice and rats away from grain stores. However, a gravesite discovered in 1983 in Shillourokambos, Cyprus, dating to 7500 BC, contains the skeletons of a ceremonially buried human and a type of young cat. Since cats are not native to Cyprus, this suggests that cats were domesticated (or just tamed) at least this early. The cat found in the Cyprus grave was more similar to the ancestral wildcat species than to modern housecats. Statues from Anatolia created around 6000 BC have also been found depicting women playing with domesticated cats, which implies that cats were domesticated there around the same time period.

Ancient Egyptians regarded cats as embodiments of the goddess Bast, also known as Bastet (emphasizing the female -t suffix) or Thet. The penalty for killing a cat was death, and when a cat died it was sometimes mummified in the same way as a human. Recently, deep scans of several mummified felines indicated they had suffered broken necks before mummification. It is unclear why, but researchers theorize that some cats may have been sacrificed to honor Bast. Recent research indicates that cats were so popular in tombs that sometimes other animals would be wrapped up in the form of a mummified cat.

Vikings used cats as rat catchers and companions and are sometimes credited with the domestication of the Norwegian Forest Cat, or Skogkatt. The Viking goddess of love, fertility and war, Freya, was strongly associated with cats, as they were considered her sacred animals. She was often portrayed in a chariot drawn by two horse-sized winged cats. Kittens were often given in her name to brides, linking together Freya’s influence over both cats and romance.

In the Middle Ages, cats were often thought to be witches’ familiars (e.g. greymalkin of the first witch in Macbeth’s famous opening scene), and during festivities were sometimes burnt alive or thrown off tall buildings.

The human killing of cats in the middle ages has also been cited as one of the reasons for the spread of the plague, which was spread by the increased rodent population caused by the death of so many cats.

In Asia, the cat is one of the animals in the 12-year cycle of the Vietnamese zodiac. However, it does not appear in the Chinese zodiac. Legend holds that the rat, who invited the animals to the Jade Emperor’s Palace to be chosen for the zodiac, forgot to invite the cat, so the cat declared the rat its natural enemy. Another version of this story involves betrayal. As the mice and the cat were crossing a river on the back of an ox to the Palace, the mice pushed the cat into the river so the cat would not beat the mice to the palace.

In most Western cultures, cats are rarely eaten outside of extremely desperate times. However, cat meat is sometimes used to prepare regional dishes in some areas of China and Korea. Some outrage has been generated when cats have been confused with the Civet cat (also sometimes called a “bearcat”), an Asian animal related to the mongoose that slightly resembles the domestic cat and is occasionally used as a source of human food.

The cat is highly respected in Islam because of tales that the prophet Muhammad approved its domestication by one of his companions. This companion was nicknamed “Abu Hurairah” or “Father of the little cat”. In Islam, it is considered a commendable act to feed a cat milk. There are numerous stories about cats in Islam. One story tells of a cat that saved Muhammad from being bitten by a deadly snake. In another tale, when Muhammad was called to prayer he found his cat Muezza asleep on the sleeve of his robe; the prophet cut off the sleeve rather than disturb his cat. In a famous Hadeeth, a woman was doomed to Hell after she kept a cat till it starved to death.

Folklore dating back to as early as 1607 holds that a cat will suffocate a newborn infant by applying its nose to the child’s mouth, sucking the breath out of the infant. A jury in England once found that a child met his death from a cat sucking the breath out of him; this conclusion was probably reached because of the widespread acceptance of the tale. Many explanations are given to attempt to support it, the most common of which is jealousy from the cat towards the infant, as a result of the level of attention that the infant receives. Another explanation advanced is that the smell of milk from the infant’s mouth attracts the cat to do so. However, it has been shown that, unless the cat had been raised on milk, they prefer to drink water.

It is a common belief that cats have a “sixth sense” and can sense ghosts, spirits, or evil.

Today some people still believe that black cats are unlucky or that it is unlucky if a black cat crosses one’s path, while others believe that black cats are lucky. Black cats in particular are associated with Halloween festivities. Because of this, many cat rescue groups will not adopt out black cats during the month of October because they are concerned that the prospective owners are only going along with the season and, as a result, will not make a lifelong dedication to the pet. They are also afraid that the prospective owners will do away with the cat because of its alleged unluckiness. Some animal shelters will not adopt out cats of any kind (or sometimes pets in general) around Halloween because they are afraid, as a result of the moral panic claims of believers in Satanic ritual abuse, that the animals will be sacrificed. A far more plausible fear is that they may be used in Halloween-oriented pranks which could hurt or kill them. 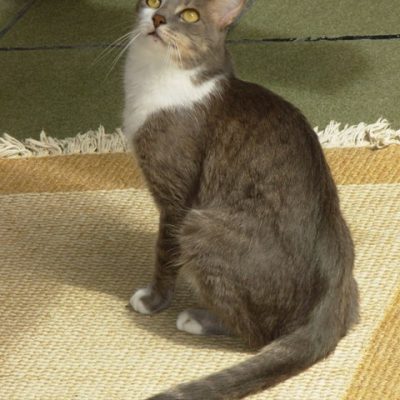 The American Keuda (pronounced KEW-da) is a type of cat. The Keuda type is currently...

A cat breed is an infrasubspecific rank for the classification of domestic cats. A cat...

Cats, like quite a few other animals, communicate several different messages making use of physique...