The World Poker Tour (WPT) is a series of poker tournaments featuring most of the world’s professional players. It was started by attorney/television producer Stephen Lipscomb who now serves as CEO of WPT Enterprises (WPTE), the firm that controls the World Poker Tour.

The tour had its debut season in the latter part of 2002 and early part of 2003, climaxing with the WPT Championship in April 2003 at the Bellagio Casino in Las Vegas, Nevada. The first season aired on the Travel Channel on American cable television in the spring of 2003. The show made its network debut on February 1, 2004 on NBC with a special “Battle Of Champions” tournament, which aired against CBS coverage of the Super Bowl XXXVIII pre-game show. The Travel Channel aired the first five seasons of the Tour. In April 2007, WPTE announced that the series would move to GSN for its sixth season in the spring of 2008. The first WPT tournament to air on GSN, the Mirage Poker Showdown, debuted on March 24, 2008.

The World Poker Tour is a collection of Texas hold ’em poker tournaments held internationally, but mainly in the United States. The television show has led to a boom in the table game across American homes, local casinos and poker rooms, and online. It is perhaps not surprising, therefore, that the key sponsors of the tour are casinos and online poker sites. The show, which is syndicated internationally, is co-hosted by World Series of Poker winner Mike Sexton, and actor Vince Van Patten. Former model Shana Hiatt served as the show host and sideline reporter in its first three seasons. Former newscaster Courtney Friel took over the host role for the fourth season, and Sabina Gadecki for the fifth.

While both Mike Sexton and Vince Van Patten give the impression that their commentary is “live” as events happen, most of the audio for the show is recorded in post-production, so the commentators can remark about the players’ hole cards. This is due to the fact that many (but not all) of the WPT venues are prohibited by state regulations to allow camera feeds inside a gaming area. Consquently, the audio heard on the show broadcasts is a mix of audio recorded live, and audio commentary recorded in post-production.

First exemplified by the long-running World Series of Poker main event, a poker tournament gives each player an equal amount of chips to start, with colors representing different values. Play continues, typically over several days until one player has acquired all of the chips. When that occurs, that player has won the game and captures the grand prize, approximately 30-35% of the total prize pool. The resulting winner’s check can exceed one million dollars. All other competitors finish with no chips, but win a portion of the prize pool according to the order in which they left the tournament. The last player to lose all of his chip-stack finishes in 2nd position, typically worth approximately 20% of the prize pool.

The drawing power of the WPT, like any poker tournament, is that anyone who can pay the “buy-in” (an amount ranging from $5,000 to $25,000) or win a “satellite” tournament is able to compete against the top professional players, such as Phil Hellmuth, Doyle Brunson, or the top 2004 tournament money and multi-WPT tournament winner, Daniel Negreanu.

Fans of the show find it interesting due to technical innovations such as the ability to see the players’ hole cards through a small camera in front of them on the poker table (an innovation first seen on the UK programme Late Night Poker). Due to the success of the show, special programs, such as the “Hollywood Home Game”, featuring celebrities playing for charity, and “Ladies Night”, where six of the top women played against each other, were developed.

Now in its sixth season of broadcast, it still remains among the highest rated television programs on cable. It airs Mondays on Game Show Network. The first three seasons of WPT are also available on NTSC DVD. (The second season DVD set features audio commentary by several of the players. The third season is only available in a “Best Of” format, featuring just half of the episodes.) CITY TV airs the WPT on Sundays at 4pm PST in Canada with a rebroadcast at Midnight (or shortly after depending on the length of their Sunday Night Movie. The series moved to Monday nights since the move to GSN in 2008. Beginning with the 2008 season, host Mike Sexton no longer toasts the winner of the Tournament with an “official beer of the World Poker Tour” (sponsored in years past by Anheuser-Busch). They now provide champagne glasses for their salute.

A series of spin-off tournaments, titled the Professional Poker Tour, began filming in 2004. No episodes have as yet been broadcast, partly due to a dispute with the Travel Channel over rights. In the fall of 2005, WPTE announced that “a cable channel” (believed to be ESPN) had withdrawn from bidding for the PPT series, and that WPTE was negotiating with the Travel Channel to air the series. On January 30, 2006, WPTE and the Travel Channel announced that they had dismissed all open lawsuits and agreed to air as many as 44 new WPT and PPT events in 2006. The series began regular broadcast July 5, 2006, but was suspended after one season as WPTE couldn’t find a television home for a second season.

In July 2006, seven poker professionals sued WPTE, alleging violations of the Sherman Antitrust Act, the California Cartwright Act, and intentional interference with contract (Complaint and Response). The professionals (Chris Ferguson, Andy Bloch, Annie Duke, Joe Hachem, Phil Gordon, Howard Lederer, and Greg Raymer) allege that WPTE’s standard release forms, required for participation in WPTE events, are anti-competitive and designed to interfere with their contractual obligations to other companies. The anti-competition claim is based on the fact that WPTE’s contracts with the casinos that host its tournaments bar those casinos (and other casinos owned by the same parent companies) from hosting non-WPTE poker events. The claim of interference with contract is based on the releases’ claim to perpetual rights to the players’ likenesses for any use WPTE wishes. The players claim that this would put them in violation of other contracts (such as Ferguson’s Activision Games contract or several players’ contracts with online poker sites). Hachem and Raymer dropped out of the lawsuit before its eventual settlement.

In April 2008, WPT Enterprises, Inc. settled with the five remaining players of the lawsuit that was brought against them, Chris Ferguson, said about the settlement, “We are happy to have come to an agreement that is fair to all players, and to have put in place a new release that clears up ambiguities in how players’ images may be used. We are especially happy that this new release will apply to all poker players who wish to participate in WPT tournaments and events.”

In January 2008, the WPT announced a set of tournaments for women, known as WPT Ladies. The first season will have five events, with buy-ins ranging from $300 to $1,500. The final table of the final event will be televised.

Player of the Year

Points are awarded for all Open events as follows:

This award is given out to one player per season. The winners so far are:

A fictional WPT championship match is the setting for the 2007 feature film Deal. Sexton, Van Patten, and Friel are slated to play themselves and a number of other poker professionals and poker-playing celebrities are reportedly in the cast. The WPT set was shipped to New Orleans for filming following the season 4 championship.

A poker tournament is a tournament at which the winners are decided by playing poker,... 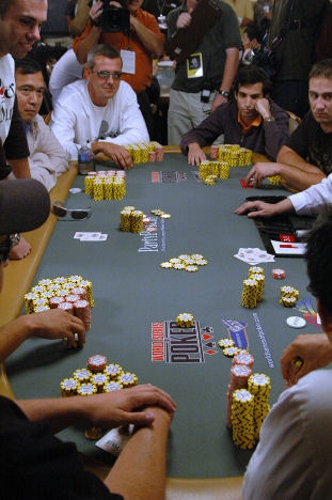 A poker tournament is a competition in which the winners are designated playing poker, according...

dark Describing an action taken before receiving information to which the player would normally be...

The history of poker is a matter of some debate. The name of the game...

The Poker Hall of Fame is a group of poker players who have played poker...