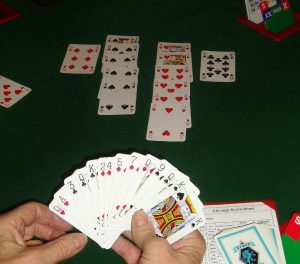 A session of bridge consists of a number of deals (also called hands or boards). A hand is dealt (or may have been pre-dealt), the bidding (or auction) proceeds to a conclusion and then the hand is played. Finally, the hand’s result is scored.

The goal of a single deal is to achieve a high score with the cards dealt. The score for the hand is affected by two principal factors: the contract (number of tricks bid in the auction, the denomination, and which side has bid it) and the number of tricks taken during play. It may also be affected by the vulnerability. The contract, a feature which distinguishes contract bridge from its predecessors, is an undertaking made during the auction by one partnership that they will take at least the stated number of tricks, either with a specified suit as trumps, or without trumps (notrumps). The contract has two components: level and strain (also called denomination).

There are seven levels, numbered 1-7, and the number of tricks required is six plus the level number, so may be anywhere between 7 and 13. The five strains are ranked, from lowest to highest, as clubs (♣), diamonds (♦), hearts (♥), spades (♠), and notrump (NT). The two lower-ranked suits (♣ and ♦) are called the minor suits (or minors), and the higher-ranked suits (♥ and ♠) are called majors. Minor suit contracts score less, so are less frequently chosen.

For instance, the contract “3 hearts” is a promise that the partnership will take nine tricks (six plus three) with hearts as the trump suit. Thus, there are 7 × 5 = 35 possible basic contracts; 1♣ being the lowest, followed by 1♦ etc., up to 7NT.

It can sometimes be advantageous to bid a contract that one does not expect to make and to be defeated, thus losing some points, rather than allow the opposing side to bid and make a contract which would score them an even greater number of points. This is known as a sacrifice, and is quite common if both sides are contesting the final contract. This aspect is more common in duplicate bridge than in rubber bridge owing to the different scoring systems in effect. 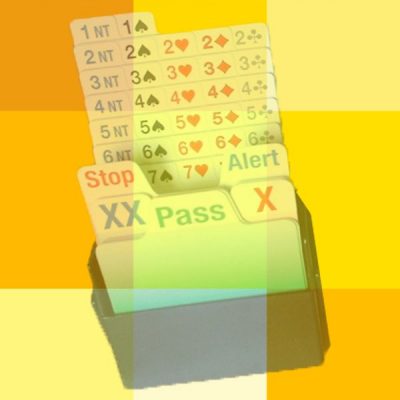 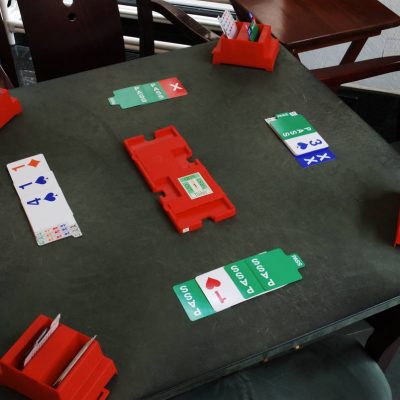