A card game is any game using playing cards, either traditional or game-specific.

The deck or pack

A card game is played with a deck (common in the US), or pack (common in the UK), of cards intended for that game. The deck consists of a fixed number of pieces of printed cardboard known as cards. The cards in a deck are identical in size and shape. Each card has two sides, the face and the back. The backs of the cards in a deck are indistinguishable. The faces of the cards in a deck may all be unique, or may include duplicates, depending on the game. In either case, any card is readily identifiable by its face. The set of cards that make up the deck are known to all of the players using that deck.

There are also some card games that require multiple standard decks. In this scenario, a “deck” refers to a set of 52 cards or a single deck, while a “pack” or “shoe” (Blackjack) refers to the collection of “decks” as a whole.

Dealing is done either clockwise or counterclockwise. If this is omitted from the rules, then it should be assumed to be:

A player is chosen to deal. That person takes all of the cards in the pack, stacks them together so that they are all the same way up and the same way round, and shuffles them. There are various techniques of shuffling, all intended to put the cards into a random order. During the shuffle, dealer holds the cards so that he or she and the other players cannot see any of their faces.

Shuffling should continue until the chance of a card remaining next to the one that was originally next to is small. In practice, many dealers do not shuffle for long enough to achieve this.

After the shuffle, the dealer offers the deck to another player to cut the deck. If the deal is clockwise, this is the player on her right; if counter-clockwise, it is the player on her left. The invitation to cut is made by placing the pack, face downward, on the table near the player who is to cut: who then lifts the upper portion of the pack clear of the lower portion and places it alongside. The formerly lower portion is then replaced on top of the formerly upper portion.

The dealer then deals the cards. This is done by dealer holding the pack, face-down, in one hand, and removing cards from the top of it with her other hand to distribute to the players, placing them face-down on the table in front of the players to whom they are dealt. The rules of the game will specify the details of the deal. It normally starts with the players next to the dealer in the direction of play (left in a clockwise game; right in an anticlockwise one), and continues in the same direction around the table. The cards may be dealt one at a time, or in groups. Unless the rules specify otherwise, assume that the cards are dealt one at a time. Unless the rules specify otherwise, assume that all the cards are dealt out; but in many games, some remain undealt, and are left face down in the middle of the table, forming the talon, skat, or stock. The player who received the first card from the deal may be known as eldest hand, or as forehand.

The set of cards dealt to a player is known as his or her hand.

Throughout the shuffle, cut, and deal, the dealer should arrange that the players are unable to see the faces of any of the cards. The players should not try to see any of the faces. Should a card accidentally become exposed (visible to all), then normally any player can demand a redeal – that is, all the cards are gathered up, and the shuffle, cut and deal are repeated. Should a player accidentally see a card (other than one dealt to herself) she should admit this.

It is dishonest to try to see cards as they are dealt, or to take advantage of having seen a card accidentally.

When the deal is complete, all players pick up their cards and hold them in such a way that the faces can be seen by the holder of the cards but not the other players. It is helpful to fan one’s cards out so that (if they have corner indices) all their values can be seen at once. In most games it is also useful to sort one’s hand, rearranging the cards in a way appropriate to the game. For example in a trick taking game it is easier to have all one’s cards of the same suit together, whereas in a rummy game one might sort them by rank or by potential combinations.

A new card game starts in a small way, either as someone’s invention, or as a modification of an existing game. Those playing it may agree to change the rules as they wish. The rules that they agree on become the “house rules” under which they play the game. A set of house rules may be accepted as valid by a group of players wherever they play. It may also be accepted as governing all play within a particular house, café, or club.

When a game becomes sufficiently popular, so that people often play it with strangers, there is a need for a generally accepted set of rules. This is often met by a particular set of house rules becoming generally recognised. For example, when whist became popular in 18th-century England, players in the Portland Club agreed on a set of house rules for use on its premises. Players in some other clubs then agreed to follow the “Portland Club” rules, rather than go to the trouble of codifying and printing their own sets of rules. The Portland Club rules eventually became generally accepted throughout England.

There is nothing “official” about this process. If you decide to play whist seriously, it would be sensible to learn the Portland Club rules, so that you can play with other people who already know these rules. But if you only play whist with your family, you are likely to ignore these rules, and just use what rules you choose. And if you play whist seriously with a group of friends, you are still perfectly free to devise your own set of rules, should you want to.

It is sometimes said that the “official” or “correct” sets of rules governing a card game are those “in Hoyle”. Edmond Hoyle was an 18th-century Englishman who published a number of books about card games. His books were popular, especially his treatise on how to become a good whist player. After (and even before) his death, many publishers have taken advantage of his popularity by placing his name on their books of rules. The presence of his name on a rule book has no significance at all. The rules given in the book may be no more than the opinion of the author.

If there is a sense in which a card game can have an “official” set of rules, it is when that card game has an “official” governing body. For example, the rules of tournament bridge are governed by the World Bridge Federation, and by local bodies in various countries such as the ACBL in the USA, and the EBU in England. The rules of skat in Germany are governed by the Deutsche Skatverband which publishes the Skatordnung. The rules of French tarot are governed by the Fédération Française de Tarot. But there is no compulsion to follow the rules put out by these organisations. If you and your friends decide to play a game by a set of rules unknown to the game’s official body, you are doing nothing illegal.

Many widely-played card games have no official regulating body. An example is Canasta.

An infraction is any action which is against the rules of the game, such as playing a card when it is not one’s turn to play and the accidental exposure of a card.

In many official sets of rules for card games, the rules specifying the penalties for various infractions occupy more pages than the rules specifying how to play correctly. This is tedious, but necessary for games that are played seriously. Players who intend to play a card game at a high level generally ensure before beginning that all agree on the penalties to be used. When playing privately, this will normally be a question of agreeing house rules. In a tournament there will probably be a tournament director who will enforce the rules when required and arbitrate in cases of doubt.

If a player breaks the rules of a game deliberately, this is cheating. Most card players would refuse to play cards with a known cheat. The rest of this section is therefore about accidental infractions, caused by ignorance, clumsiness, inattention, etc.

As the same game is played repeatedly among a group of players, precedents build up about how a particular infraction of the rules should be handled. E.G. “Sheila just led a card when it wasn’t her turn. Last week when Jo did that, we agreed … etc.”. Sets of such precedents tend to become established among groups of players, and to be regarded as part of the house rules. Sets of house rules become formalised, as described in the previous section. Therefore, for some games, there is a “proper” way of handling infractions of the rules. But for many games, without governing bodies, there is no standard way of handling infractions.

In many circumstances, there is no need for special rules dealing with what happens after an infraction. As a general principle, the person who broke a rule should not benefit by it, and the other players should not lose by it. An exception to this may be made in games with fixed partnerships, in which it may be felt that the partner(s) of the person who broke a rule should also not benefit. The penalty for an accidental infraction should be as mild as reasonable, consistent with there being no possible benefit to the person responsible.

Baccarat is a gambling card game. It is believed to have been introduced into France...

An arcade game can be a coin-operated entertainment machine, usually installed in corporations such as...

Flimsies are a type of bingo cards printed on thin sheets of paper. They are... 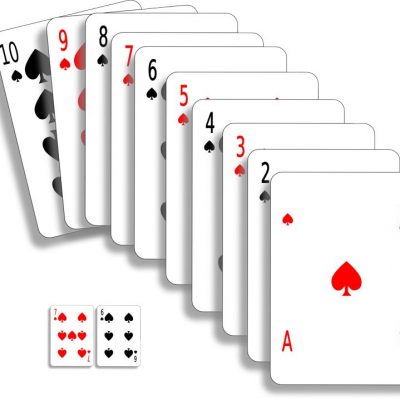 Bovine bingo is a traditional rural fundraising game that is often played at country fetes...