Inability of citizens to govern, ignorance and inexperience of the masses

Plato was the first to develop an important analysis and theory aimed at denouncing democracy, in this case the Athenian democracy, in which he lived. His criticism therefore does not strictly speaking aim at what today we are accustomed to designating as a democratic regime (representative and liberal regime). His opposition to the sharing of political power among all citizens is based on the idea that to govern, one needs a certain wisdom and a certain knowledge – more precisely, having accessed the knowledge of the Ideas of the True, the Just and the Good. According to him, the simple citizens, ignorant of the Truth and thinking above all according to their particular interests, cannot manage the city well, and consequently the power of the citizens can only lead it towards corruption. On the contrary, he thus defends the idea that only philosopher kings, or king philosophers, should govern.

In a way, this idea of ​​the incapacity of citizens to direct public affairs and to legislate is found later in other Western thinkers, in the United States as well as in France. American President Thomas Jefferson asserted at the end of the 18th century: “There is a natural aristocracy, founded on talent and virtue, which seems destined for the government of societies, and of all political forms, the best is that which provides most effectively to the purity of the selection of these natural aristocrats and their introduction into government.”

In the same way, John Adams and James Madison in the United States, or Emmanuel-Joseph Sieyès or Montesquieu in France, clearly express their criticisms of the idea of ​​direct democracy, opposing to it the advantages of a representative regime, which they therefore conceived of it as an alternative to democracy rather than its equivalent.

Parallel to the critique of human rights, Marx, and the Marxists following him denounced what they described as bourgeois democracy for its factitious character. The political equality of citizens that liberal democracies claim to establish and guarantee would be contradicted by the relationship of domination between the bourgeois and proletarian class. Thus, Marxist currents consider that in a capitalist society, the equality of citizens is mainly fictitious and illusory, and that the rights and freedoms granted to individuals are, within liberal democracies, not concrete and effective, but simply “formal”. This, mainly in that they in no way contravene economic inequalities, which have repercussions as unequal access to knowledge and information, thus preventing the proletariat from really enjoying the rights and freedoms which are theoretically granted to it, but therefore materially inaccessible. Marx also denounces the bourgeois conception of freedom which would be contained in the declaration of the rights of man and of the citizen in that it guarantees private property, including the means of production.

According to Lenin in 1919, who relied among other things on Engels’ work The Origin of the Family, Private Property and the State,

“Whatever form the republic takes, even the most democratic, if it is a bourgeois republic, if there remains private property in the land, plants and factories, and if private capital keeps the whole of society there in a state of wage slavery, in other words if the one does not realize there what the program of our Party and the Soviet Constitution proclaim, then this State is a machine which is used by some to oppress others.”

Representative rule, a “liberal oligarchy” rather than a democracy

Some contemporary thinkers consider that representative democracies are only pseudo-democratic, where the people are in fact dispossessed of effective political power, which in their eyes is held by a small minority of individuals (oligarchy), made up of politicians (representatives), experts or the economic elite. Their critique of representation has a certain affiliation with Marxist critique, but differs on a number of points.

Democracy as a framework for the masses

Jacques Ellul, based on his analysis of the technical system and modern means of propaganda, considers that from the utopia of a “democracy-control”, in which the state administration is really controlled by the people, we are today shifted to a “democracy-framework”. “Democracy is no longer a means of controlling power but of controlling the masses”, he asserted in The Political Illusion in 1965. This is also the conclusion of Noam Chomsky when he criticizes the views of a “Walter Lippmann and [of] all the other representatives of that leading school of ‘democratic’ thinkers in the West: democracy requires an elite class to handle the decision-making and ‘manufacture’ the consent of the the whole population towards policies that are supposed to go beyond what they are able to develop and decide for themselves”.

Democracy and its “watchdog”

These thinkers, in particular Noam Chomsky in Manufacturing Consent: The Political Economy of the Mass Media, structure their analysis by encompassing the role of the media in the field of democratic failures, whereas modern theories of democracy in Europe, and its European institutions, entrust the media with the role of “watchdog” of democracy. Thus, the case law of the European Court of Human Rights considers that the press could “be less able to play its indispensable role as watchdog” of democracy if the absence of protection of the sources of information of journalists dissuades sources of information (experts, witnesses, specialists) from helping “the press to inform the public on matters of general interest”.

The existence of state or private monopolies of information and the erasure regime produced by the increasingly rapid consumption of information make the exercise of democratic control impossible. The voting population is manipulated by media, economic or techno-scientific powers over which neither it nor the laws have control. Democracy is devoid of counter-powers in the face of an information war. By manipulating the perceptions of the voting population in order to distort its vision of reality, the undemocratic control of information can compromise the capacity of the population to form an autonomous judgment of government actions, for example. Three basic processes can be used: overinformation, underinformation, and misinformation.

Democracy as opposition to any dictatorship, even of the majority

Without rejecting democracy, many thinkers have highlighted its limits if it is not framed by immutable rules of law. In the aftermath of the revolutionary experiences of the end of the 18th century and the excesses of the Terror or the Napoleonic regime in France, Alexis de Tocqueville or Benjamin Constant underlined certain dangers of democracy.

The Franco-Swiss philosopher Benjamin Constant was one of the first to highlight this risk in his Principles of Politics (1806), while defending the need for a representative regime:

“The error of those who, in good faith in their love of liberty, have granted unlimited power to the sovereignty of the people, comes from the manner in which their ideas in politics have been formed. They have seen in history a small number of men, or even one, in possession of immense power, which did much harm; but their wrath was directed against the possessors of power, and not against power itself. Instead of destroying it, they only thought of moving it.”

This is one of the reasons why he defends a democracy based on property rights, believing that a minimum of property is necessary to be able to take part in the appointment of the leaders of the State.

Alexis de Tocqueville, if he considers the march towards democracy as irresistible, notes the risk of granting all powers to the people or to a representative body. Thus, he writes in Democracy in America:

“I regard as impious and detestable this maxim, that in matters of government the majority of a people has the right to do everything, and yet I place in the wills of the majority the origin of all powers (…). So when I see the right and the ability to do everything granted to any power whatsoever, whether we call it people or king, democracy or aristocracy, whether it is exercised in a monarchy or in a republic, I say: there is the seed of tyranny, and I seek to go and live under other laws. What I most reproach to democratic government, as it has been organized in the United States, is not, as many people in Europe claim, its weakness, but on the contrary its irresistible force.”

To this drift of a “Jacobin democracy”, he opposes the “liberal democracy”, respectful of individuals.

John Stuart Mill, who had read Tocqueville, develops this idea in the introductory chapter of his book On Liberty: “Therefore the tyranny of the majority is now included in political speculation among those evils against which society must be on guard.”

These remarks were taken up later by the philosopher Friedrich Hayek, in particular in The Constitution of Freedom.

Citizen disaffection with politics has been observed by the European Commission for more than fifteen years.

According to Eli Pariser, democracy is facing a crisis where voters are becoming increasingly suspicious of it. Social networks constitute a threat insofar as the platforms highlight the preferences of users, thus creating a bubble of filters that does not open the door to political debate, while promoting the political polarization of voters.

Democracy as a Western peculiarity

The universalism of these principles is contested as culture-specific and even as tools of cultural imperialism on the part of the West. The UN nevertheless has a universal declaration of human rights. We can, however, refute this contestation by arguing that it is an overly restrictive vision of the notion of democracy, which would hide the presence of the democratic principle in the traditional societies of other continents. This is what Nelson Mandela does in particular in his autobiography (A long road to freedom), where he considers that the tribal meetings of the Xhosa tribes from which he came constituted an accomplished form of democracy, with the exception of the political rights of women (not allowed in tribal meetings). 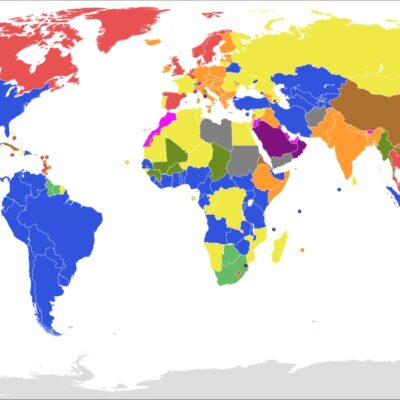