In poker, a dominating hand is one with an overwhelming statistical advantage over another specific hand. For example, in Seven-card stud, while a Starting hand of K♠ K♥ Q♦ has the lead over A♦ K♦ 10♥, the latter has many outs (ways to improve) to beat the former (catching an ace, the straight, the flush, etc.), making it a roughly even contest. However, the first hand dominates in a contest with a hand like Q♥ Q♠ J♣, because this hand has no ways to improve that the first one doesn’t also have (two pair, trips, straight), and the first hand has some of the second hand’s outs as well (unseen cards include two kings, but only one queen), giving it a significant advantage.

This concept is most important in no limit play, where it is possible to bet all your money early in the hand. One must judge not only whether your opponent’s hand might be better than yours, but whether or not it might dominate yours to such a degree that long-run fluctuations of luck will amplify the consequences of a mistaken play rather than mitigating them.

In poker, we call the blind when forced bets are made before any distribution of... 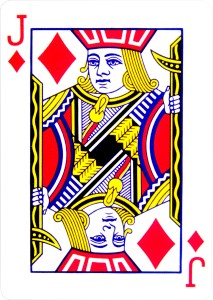 Declaration is an action in poker, when a player shows his intention to take some...

The blinds is a term used to describe the two forced bets posted by players...