Freedom of speech is the right recognized for the individual to make known the product of his own intellectual activity to those around him.

It comes from the ability to communicate between humans. This has long been considered as a simple natural phenomenon conditioning social life, before being solemnly established as individual freedom, today legally guaranteed but in reality quite tightly framed. 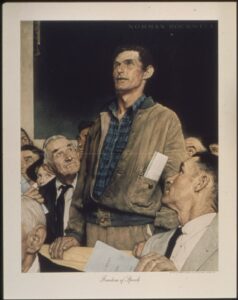 Historically, the expression of ideas, mainly in its verbal form, but also in writing, has aroused the interest of thinkers. Originally, it was seen above all as an essential element in the process of social structuring allowing the attainment of the supreme ideals of truth, perfection and justice.

Thus from the sixth and fifth centuries before the Christian era, in China, if some of the maxims attributed to Lao Tzu seemed above all to encourage the sage to lead a purely interior life without expressing his ideas, Confucius recommended the opposite attitude to higher evolved beings, affirming that it fell to them to do the work of pedagogue by teaching the laws of heaven to the people, because “the perfect man does not limit himself to perfecting himself and then stopping; it is for this reason that he also endeavors to perfect other beings”.

In its reflection on the determination of social values, Greco-Roman Antiquity, considering oral expression as a natural form of sound communication specific to human society, will also grant an essential place to its use, including the process of dialogue. Platonist offers a patent illustration. Thus, for Aristotle: “Nature, which does nothing in vain, has left only man alone the gift of speech which should not be confused with the sounds of the voice. These are only the expression of the pleasant or unpleasant sensations to which other animals are susceptible like us. Nature has given them an organ limited to this sole effect, but we have more than they, if not the developed knowledge, at least all the obscure feeling of good and evil, of the useful and of the harmful, of the just and the of the unjust; objects for the manifestation of which we have mainly been granted the organ of speech. It is this trade in speech which is the link of all domestic and civil society”. Cicero, convinced that the first natural principle of society resided in “the trade of reason and speech”, also considered that “it is by educating each other, by communicating their thoughts, by discussing, by making judgments, that men come together and form a certain natural society. Nothing distinguishes us more from beasts: in some we recognize strength, as in horses and lions, but we never attribute fairness, justice, goodness to them, because they have neither reason. nor speech”.

Already at that time, the expression of ideas was considered differently depending on the value given to their content, since it was believed that those imposed using fallacious arguments when they were bad or unjust could turn out to be harmful to society. Thus, Plato, identifying the faults of the political systems of the time, denounced the courtiers who by their interested councils misled the rulers. Aristotle analyzed the multiple factors likely to affect the truth of speeches and affirmed that “whoever misuses this power of speech can do a lot of harm”. Cicero too, although having initially assured that eloquence would triumph the good and the just, nevertheless subsequently recognized that it was possible for a man to use the word without worrying about morality and of duty, which made him “useless to himself, and harmful to his country.”

If one considered that the risk of a bad use of the word did not justify that one prohibits it, since according to Aristotle, such an objection could “be also directed against all the good things, and especially against what there is a more useful, such as strength, health, wealth, military art ”, it was nonetheless admitted that different treatment should be reserved for expression according to its content and according to its author.

The Trial of Socrates, prosecuted and condemned for having at the same time corrupted the youth, despised the gods of the City and tried to substitute new ones for them, was a good illustration of the risks incurred in expressing conceptions that offended the holders of power.

Plato had concluded that the leaders of the Greek cities did not have the wisdom necessary for the exercise of their functions, and that at the time it was absolutely necessary “when one wants to fight for justice and if one wants to live for a while, to confine oneself to private life and not to approach public life ”. Also, in The Republic, he advocated a scheme of ideal City in which the supreme magistracy should be entrusted to an aristocracy of specially recruited and trained philosophers, holders of knowledge since they “contemplate things in their essence”. Such a mode of organization also implied an inequality of treatment between rulers and ruled in the use of the faculties of expression. Indeed, unlike the philosophers, the mass of the people, failing to apprehend the “essences”, was considered incapable of wisdom. Plato believed that it could only judge “on appearance”, and therefore did not lend its real “knowledge”, but “opinions”, that is to say “something intermediate between science and ignorance ”. Also, the criticisms and suggestions that it would not fail to formulate could not but be illegitimate and dangerous, and to preserve the proper functioning of the institutions the magistrates had to ignore them, while they themselves were authorized “to deceive the ‘enemy or citizens in the interest of the state”, to use lies, in contrast prohibited to citizens.

For several centuries, we will continue to appreciate the transmission of ideas by reference to the need to protect social values, essentially religious, considered supreme. Thus, for Saint Augustine, the discussions around faith in God were always vain and idle since the man aspiring to live according to himself in reality lives according to the lie whereas only God is the Truth.

It is from the Renaissance that in a context of exacerbation of interfaith tensions, the humanist current, amplified by the development of printing, will endeavor to present the expression of convictions as a means of personal achievement and emancipation of the individual by pleading in particular for tolerance in the approach of the difference of religious beliefs. Thus, at the very moment when the wars of religion begin, Sébastien Castellion, a Protestant theologian from Bugey, noting that the two camps testified to the same fanatic violence, urged them not to use force against those they considered heretics, and to resist them “by word if they only use their word”, citing the Turks as an example, who considered their subjects independently of their religion.

In 1651, in Chapter XI (Of the difference of the manners) of his Leviathan, Hobbes, analyzing the conditions having to allow the men to “live in peace and in harmony” noted with realism that their lack of judgment leads them to handing over to ambitious people who know how to give themselves an appearance of wisdom by using eloquence and flattery, supported by “military reputation”. So he spoke with great pragmatism about the dissemination of ideas, insisting on the prudence and discretion with which they had to be expressed, and above all on the relativism of the judgments they could give rise to. He noted that one gives different names to one and the same thing according to the difference of individual passions. So those who approve of a particular opinion call it Opinion, but those who disagree with it call it Heresy; and yet the word heresy means nothing more than a particular opinion, with only a more marked shade of anger.

The so-called “Enlightenment” movement will contribute to the development and dissemination of these conceptions valuing the place of the individual in the social system, leading to the consecration of freedom of expression as a legal standard. “To blame it is not flattering praise.” The famous replica of Figaro, the main character in the Marriage of Figaro of Beaumarchais, makes this author a leading figure in freedom of expression.

Right to express oneself, individual freedom

In 1784, Kant observed that “the Enlightenment is for people the issue of their own irresponsibility …”, because according to him, the essential contribution of the period was the possibility offered to the subjects to express their opinion, even in criticizing the laws. He considered that freedom was an innate (natural) right of the individual, and included in particular freedom of thought and its corollary freedom of expression.

In Kantian thought, however, freedom is not without limits. These are primarily moral limits. Thus, if in their relations with each other, individuals can express themselves freely, the use of words such as lies, slander, mockery, is contrary to “virtue” because it lacks respect for others.

The restrictions are also of a legal order, because if natural law establishes individual freedom as a principle, it provides it with the limits logically necessary for its conservation, freedom only existing “in so far as it can be granted. , according to a general law, with the freedom of each one ”. Thus, the rules of law governing communication between individuals can accommodate the morally condemnable practice of lying, but only as long as it does not “directly infringe the rights of others”, for example their property. Likewise, the right which the governed naturally have to criticize the governing does not go so far as to exempt them from obeying them, even when they become oppressive, because for Kant, to admit the contrary would call into question the very foundation of the legal system.

In 1859, John Stuart Mill will be inspired by the same principles in his essay On Liberty, which has become one of the reference works of liberalism, but in the meantime, the right to express one’s convictions will have been formally consecrated as individual freedom by solemn texts to legal standard value.