Modern philosophy is the thought which, in the West, spans what historians call the modern era (1492-1789), including part of the Renaissance, the 17th century, and the Age of Enlightenment. It should not be confused with contemporary philosophy.

Modern philosophy is, on the one hand, the heir to ancient thought in many ways. The thinkers of the modern era, such as Spinoza, Descartes, Leibniz or Hume, are in fact far from having severed all links with the philosophy of the Ancients. They knew them perfectly and notably borrowed part of their vocabulary from them. But, on the other hand, the Moderns often conceived of their own work as an improvement or going beyond what the ancient philosophers had already accomplished, which sometimes led them to oppose the latter.

Compared to ancient philosophy and medieval philosophy, modern philosophy, initiated by the philosophy of the Renaissance, and intimately linked to the rise of modern science, marks a profound renewal of thought, both in the political domain, than in the theory of knowledge or even the reflection on religion.

But modern philosophy, depending on the period that defines it, also includes, from the end of the 17th century, the philosophy of the Enlightenment: Locke, Rousseau, Diderot, Voltaire among others. The word “philosopher” takes on the new meaning of “member of the philosophical party” as a political philosophy takes shape which favors democracy, tolerance and the sovereignty of the people, whether in the Tractatus Theologico-Politicus of Spinoza, Rousseau’s The Social Contract or in Locke’s Two Treatises of Government.

The other great characteristic of modern philosophy is the importance that science plays in it, even if it should be noted that the philosophy of the seventeenth century rather favors mathematics and physics (mechanistic), while the philosophers of the eighteenth century turn more to biology. Indeed, thinkers often led a scientific career, or at least nurtured a keen interest in science. Leibniz and Descartes, in particular, were great scholars, just as a century later Diderot developed reflections announcing transformism. From the point of view of method, philosophy is then inspired either by mathematics (such as Descartes and Spinoza) or by physics (Hobbes); or else it tries to found a method applicable to all fields of knowledge: philosophy, physics, mathematics, etc., for example for Leibniz. The method of philosophy is therefore often inspired by that of science or mathematics. 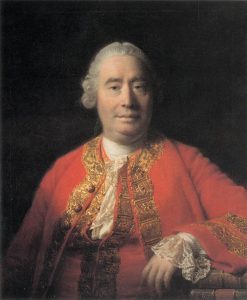 Finally, with regard to the theory of knowledge, it is traditional to distinguish two major currents: rationalism (with Descartes, Leibniz and Spinoza) and empiricism (Hume and Locke). Very schematically, the “rationalists” assert the existence of a knowledge independent of experience, purely intellectual, universally valid and unmistakable. The empiricists assert that all knowledge proceeds from induction and sensory experience. They are often also skeptics (e.g., Hume) who assert that there is no universally valid knowledge, but only judgments born of induction and which experience can refute.

The German philosopher Kant defends an original position in this discussion by arguing that all empirical knowledge is subordinated to a priori forms of sensitivity or pure intuitions (space, time) which make this experience possible. His philosophy therefore combines both empiricism in that it does not deny the role of experience in our knowledge and rationalism, since the characteristic of these a priori forms is precisely to escape experience. Kant thus distinguishes a priori knowledge established independently of any experience (e.g., logical knowledge) from a posteriori knowledge founded by means of experience (e.g., the statement that the Earth revolves around the Sun).