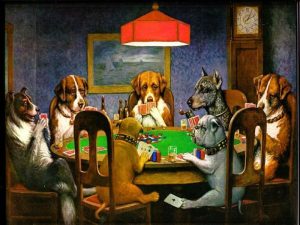 Another way to see the bluff is that it reflects the principle: you have to pay to see a strong hand. Applying this principle, facing the raise of Bob, Alice must raise to pay Bob’s Full – and therefore, should also bluff when she decides to denounce the bluff of Bob, so as to force him to call and take advantage in average of his full.

The exchange feature is:

At this point, Bob is always exposed to three basic choices: fold, call, or raise?

Except in special cases, a player who raised (to show a strong hand) has no objective reason to re-raise. If he does, it is for reasons that relate to the psychological play.

Alice raising twice the pot, the neutral point is to call one in three, regardless of the hand of Bob. In fact, if Alice plays rationally and made a raise, she is bluffing once in three, and a game winner the rest of the time. Calling a winning hand 66% is statistically expensive, but that’s the price to pay, because Alice is bluffing correctly, and that the bluff of Alice remains limited.

That said, Bob showed successfully completing his draw and as he bluffs rationally, the draw is two out of three. As to fold, do it only on hands that were losing anyway. Alice can bluff with a three of a kind, and it would be silly to call with a simple pair when you can make it in average with a straight … If there is a re-raise from Alice, Bob strategy is:

Raise (shows a four of a kind or a straight flush)

A rational raise shows a hand much stronger than that already showed by the opponent.

When asked “a card”, the four of a kind (served) or straight flush only occur in 0.25% of distributions: during the hundred shots that represents a party, improving a draw will see ten times, but a served four of a kind or an improvement to the straight flush is a hand we see only once in four parties. And it has to be just when Alice says she improves his hand to full? The coincidence is extraordinary …

The reasoning can be no more statistical, but must be psychological, because such a game will certainly not present twice at the table.

A frequent kind of cheating is with a companion or several partners, that is referred...