If Bob has a weak hand, the choice for him is between bluffing or pass. If he decides to bluff a little, the risk he takes depends on the strategy of Alice: he risks a further loss of the amount of its R raise (with a frequency of a + α), but can recover the pot P as Alice does not follow (other times). The equilibrium point for Bob is achieved if R (a + α) = P (1- (a + α)), that is to say, (a + α) = P / (P + R), and this equilibrium depends only on the probability that Alice has to go. If Alice sanctions less frequent, Bob’s bluff may be more frequent, if Alice sanctions more frequently, Bob’s bluff should be less frequent, and if Alice plays exactly this neutral point, the gain of Bob does not depend on its bluff rate.

Against a raise of Bob, even if Alice has a potentially losing hand, it may elect to sanction a possible bluff, by “calling” the bet. The following table describes the three choices of Alice and possible gains, after Bob decided to rise:

Alice will lose its rise (R-r) in the b = 14.6% of times when the drawing of Bob came true, but with a frequency of β% she recovers both the pot and the rise of Bob. Equilibrium is reached when (R-r).(b) = β.(P + R), which depends only on the Bob bluff rates (and of course, its level of rise). If β < b.(R – r)/(P + R), to seek to punish a bluff is an average loss of money, so best leave bluff and do nothing. If instead β exceeds this limit, the sanction of a possible bluff brings in an average of money, so it is better to follow consistently.

The neutral point is reached for both players when Alice comes to the raises with probability a + α = P / (P + R), and Bob bluff with a probability β = b. (R – r) / (P + R) . If Bob keeps exactly this bluff rate, he will earn on average the same, whatever the strategy of Alice: he will earn more thanks to bluff if Alice comes to see less often, and more with successful draws if Alice comes more often. Similarly, if Alice keeps strictly the following of this rate, she will gain much, whatever Bob strategy.

Note that the optimal frequency of bluff β is always less than b, that of the supposed winning hand: when a rational bluffer displays a strong hand, it occurs more than once in two. Conversely, therefore, if a bluffer shows his strong hand less than half the time when one comes to see his bluff is not rational but psychological, and good strategy is to call more often.

What is the point of playing on the neutral point? The gain can be calculated simply by assuming that Alice is in the neutral point, and Bob never bluffs (since it is sufficient that there be two players for the result to be neutral). The following table shows the possible gains of Bob after he rised:

We see that the effect is not bluffing on weak hands (where the result is statistically indifferent), but the strong hands:

Bluffing on a low hand is therefore not an attempt to deceive or a forced passage against the statistics, but simply an investment to do, wisely calculated to increase his earnings over the entire game.

The characteristic exchange with a rise of Bob then implicitly means:

Reason to play in neutral point

For Bob, playing neutral point has a direct financial benefit: on average he will earn more money without bluffing, either on his strong hands valued called by Alice, or due to the unfulfilled bluffs. The game on the neutral point presents a psychological and statistical advantage: as the profitability of the hand does not depend on psychological factors, it ensures a regular game without financial surprise. The only downside is subject themselves to bluff only within rational limits, without being guided by his inspiration. That said, it may continue to do from time to time: it will be statistically undetectable.

For Alice, the game on the neutral point is not financially beneficial, because it is statistically a waste of money against a player who obviously never bluffing, or bluffing with a frequency clearly below its neutral point. However, this is insurance against big bluffers or erratic players: playing on the neutral point, she can play without having to guess what hides his opponent’s strategy. The insurance has a cost, but on average, it is the same cost that she will win when will be in position to bluff: on average, it is a zero sum strategy. This does not stop calling to see less often those hands which she thinks that the opponent can not bluff, of course, if her intuition is strong.

We know that Alice can calculate its “neutral point” according to Bob rise rate. The gain of Bob by bluffing strategy is therefore by replacing α with its value:

We see that based on R (the level of rise compared to the pot), the gain follows a hyperbolic branch, and is maximal when its differential vanishes:

In fact, it is not very important to play exactly on the optimum, because around this value the average gain does not vary much. One can generally remember that if the probability of Alice of winning are about 10%, the Bob‘s raises are optimal for nearly twice the pot.

Usinf raises twice the pot (R=2P), Bob is bluffing with a frequency equal to two-thirds of its probability of having the strong hand he claims (b = 14.6%), or about 10%. When its draw is losing (which happens with relative frequency of 85.4%), in order to enhance its long-term winning drawings, it must still bluff in 10% / 85.4% = 11.7% of its losing hands, aggressively raising to twice the amount of the pot.

The cat and the mouse

The neutral point is stable in the sense that if one of the two players uses it, the average gain is independent of the strategy of the other player. But it is a strategy that has a cost: on average, you must call to see the raise, typically one in three.

If Alice constantly plays on its neutral point, Bob may attempt a psychological game: to believe in an eccentric strategy, and guess when Alice will change its strategy to reverse his behavior. Bob can be provocative on a series of small hands, by clearly no longer playing on his own. Bluffing “clearly” too often is relatively easy: Alice eventually realize that when she call, the winning hand is not to the statistically expected level.

When Bob clearly departs from its neutral point, Alice can alter the rate of sanction accordingly, and to charge Bob for his inconstancy: If Bob‘s strategy is stable, Alice can benefit. But to do this, she must herself away from the neutral point and call to see much more often, which exposes it to claw back from Bob …

For example, on fifteen raises of Bob, Alice should call to see average five times. It would be normal that Bob has bluffed twice on average, or even three, but four or five discovered bluffs shows that Bob certainly did not play its neutral point. Alice will be tempted to call more often, allowing Bob (who meanwhile has returned to the level of optimal bluff) to gain more often the price of the raises. Conversely, if Bob never bluffs on this sequence, Alice will be tempted to call less often, allowing Bob to increase its rate of bluff with impunity.

A frequent kind of cheating is with a companion or several partners, that is referred... 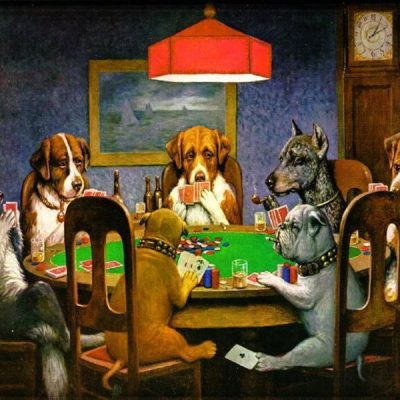 Another way to see the bluff is that it reflects the principle: you have to... 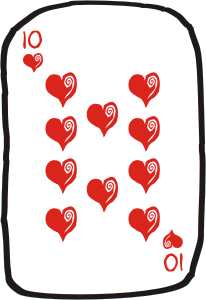