Kindle (from the verb “to kindle”, “to light a fire”) is an e-reader that lets you connect to the Internet to download content (digitized books, newspapers and magazines …), the license to use being sold online through the US website Amazon.com. The file format is proprietary, they are protected by a digital rights management (DRM) system. The transfer does not require a computer or Wi-Fi connection, it is done through the high-speed wireless network of mobile operator Sprint. The user can also upload their own documents on the Kindle by connecting the camera to a computer via USB or sending them by e-mail at a price of 10 cents per item. Word documents and various image formats are converted by Amazon after sending by e-mail in order to be played on the Kindle. An integrated browser provides access to the Web and has a set of pre-selected favorites.

There are to date ten hardware versions:

These e-readers can be equipped with three levels of service:

Scribd is an online document sharing site since March 2007. Its headquarters are in San... 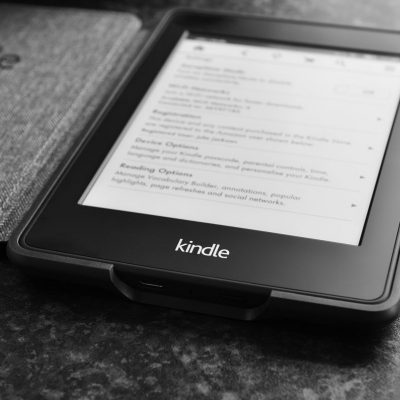 An e-book reader (eReader) is a mobile device designed primarily to read digital books (or...

An e-book reader, also known as an e-book device or e-reader, is a mobile electronic...

iBooks is an application to acquire digital books in an online store and then read...

Nook is a brand of e-readers sold by Barnes & Noble in the US since...