Trajan, the famous Roman emperor and general, minutely prepared the war against the Dacians. He turned the Danube into a navigable river and cut its banks in order to create a road in the Iron Gates area which allowed him to concentrate over 200,000 soldiers on the southern bank of the river. Two bloody battles took place between 101- 105.

Decebalus, King of the Dacians

The interval between 103-105 was used in order to build a stone bridge across the Danube. It enabled the Roman army to complete the conquering of Dacia. The last armed resistance of the Dacians took place in the Orastiei Mountains. Decebalus, the Dacian king killed himself.

In 106, the Dacian territory was turned into a Roman province. The ancient historian Dio Cassius reports on the fabulous spoils of war taken away from the Dacian territory: 165,500 kg of gold and 331,000 kg of silver, the equivalent of ROL 618 million/hard currency in 1916.

While the bridge was being built, the Roman camp of Drobeta was also being erected having the mission to defend the northen end of the bridge. This was the first stone stronghold to be erected in the province of Dacia. It was a small-sized camp (137.5 x 123 m) which was able to shelter the effective force of an auxilliary body of soldiers.

The Remains of the Roman Camp Drobeta

As the town itself, it went through several erection phases, the present one dating from Constantine the Great’s epoch. In times past, several military units used this camp as their base: COHORS I CRAETUM. COHORS I SAGITTARIORUM, COHORS I ANTIOHIENSIUM as well as many drafts belonging to the Fifth Legion – Macedonlca. 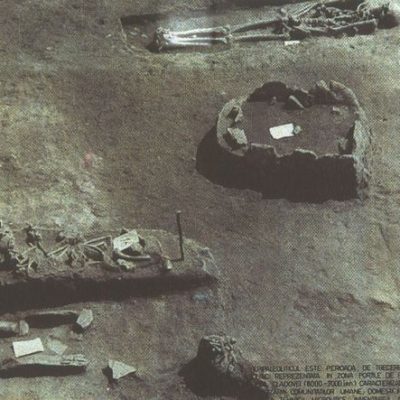