Poker is a microcosm of all we admire and disdain about capitalism and democracy. It can be rough-hewn or polished, warm or cold, charitable and caring or hard and impersonal. It is fickle and elusive, but ultimately it is fair, and right, and just.—Lou Krieger

If you can’t spot the sucker within the first half hour at the table, then you are the sucker.—common poker saying, as spoken by Matt Damon in Rounders; originally attributed to Amarillo Slim

Whether he likes it or not, a man’s character is stripped bare at the poker table; if the other players read him better than he does, he has only himself to blame. Unless he is both able and prepared to see himself as others do, flaws and all, he will be a loser in cards, as in life.—Anthony Holden (from Big Deal)

There are few things that are so unpardonably neglected in our country as poker… Why, I have known clergymen, good men, kindhearted, liberal, sincere, and all that, who did not know the meaning of a ‘flush’. It is enough to make one ashamed of one’s species.—Mark Twain

Nobody is always a winner, and anybody who says he is, is either a liar or doesn’t play poker.—Amarillo Slim

They anticipate losing when they sit down and I try my darnedest not to disappoint one of them.—Amarillo Slim

Poker is a game of people. . . . It’s not the hand I hold, it’s the people that I play with.—Amarillo Slim

Hold-’em is to stud what chess is to checkers.—Johnny Moss

Poker is the game closest to the western conception of life, where life and thought are recognized as intimately combined, where free will prevails over philosophies of fate or of chance, where men are considered moral agents and where – at least in the short run – the important thing is not what happens but what people think happens.—John Lukacs

Last night I stayed up late playing poker with Tarot cards. I got a full house and four people died.—Steven Wright

Cards are war, in disguise of a sport.—Charles Lamb, Essays of Elia (1832)

Poker is a godless game, full of random pain.—Andy Bloch

You call this one and it’s all over, baby.—Scotty Nguyen, during the 1998 World Series of Poker. Down to him and one other player, he said this to his opponent who called, and it was all over.

Luck favours the backbone, not the wishbone.—Doyle Brunson

Mae West: Is poker a game of chance? W.C. Fields: Not the way I play it.—My Little Chickadee

Yeah, well, sometimes nothing can be a real cool hand.—Cool Hand Luke, showing his stone-cold bluff after winning a 5-card stud pot

The game exemplifies the worst aspects of capitalism that have made our country so great.—Walter Matthau

The descriptions below assume a familiarity with the general game play of poker, and with...

quarter To win a quarter of a pot, usually by tying the low or high...

You can win a lot of great things at the game of poker for minimal...

A poker tournament is a tournament at which the winners are decided by playing poker,... 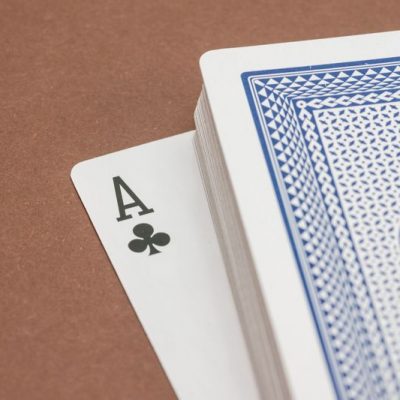 In poker card game, a playing card is called “burned” if it is removed from...

family pot A deal in which every (or almost every) seated player called the first...