(Rock carvings in the Swedish province of Bohuslän, made between 1800 and 500 BC and showing a spruce)

If it is clear that the custom of the modern Christmas tree dates back to the Renaissance in the Germanic countries (attestation in the 15th century in the end-of-year ceremonies of the Germanic and Livonian guilds, Riga officially claims that was erected and decorated the first Christmas tree in his city in 1510), there are a number of theories that speculate as to its more distant origin.

The image of the tree as a symbol of renewal of life is a traditional pagan theme found in the ancient and medieval world (see, in particular, idolatrous worship and the many mythologies linked to the World Tree) before this symbol be assimilated by Christianity. The fir and spruce, evergreen conifers, have long been reminiscent of the symbolism of the Renaissance during the winter solstice, as evidenced by rock carvings in the Scandinavian regions.

According to the Encyclopædia Britannica, the use of evergreen trees, crowns and garlands to symbolize eternal life, is an ancient custom among Egyptians, Chinese and Hebrews. The Romans during the Saturnalia decorated their houses with branches of laurel, boxwood or olive and leave lamps to light the demons. Tree worship is common in pagan Europe and survives its conversion to Christianity in the Scandinavian customs where tradition persists during the Yule winter festivals to decorate the house and the barn with conifers to which torches are attached and colored ribbons or hanging fir branches in the house to chase evil spirits.

(Boniface felling the oak of Thor)

Other theories attribute it the Christian origin in Gaul. The custom of the decorated spruce goes back to the missionary Saint Colomban who founded in 590 the monastery of Luxeuil at the foot of the Vosges. One Christmas evening, he took with him some of his monks to the top of the mountain where an ancient pine tree, an object of pagan worship, presided. The monks hang from the tree their lanterns and their torches and draw a luminous cross at the top. This syncretic act enables Saint Colomban to tell the wonders of the birth of Jesus to the peasants who have come to see this spectacle and to convert several of them, launching the custom of installing illuminated fir trees each year. However, no written tradition relates this story at this time when the symbolic tree par excellence in the druidic forests is the oak, the spruce being also in the Celts the tree of birth: associated with the 24 of December, it is decorated during the rituals of the winter solstice of fruits, flowers and wheat. Another legend of the eighth century is the story of the oak of Thor of Boniface of Mainz, which illustrates well the confrontation between the pagan oak and the Christian spruce. The conical shape of the fir tree allows the “Apostle of Germany” to teach the concept of the Trinity.

This Christian influence is to be found in the Middle Ages in the mysteries which have as their decoration a Christmas tree (symbolizing the tree of paradise which makes Christians refer to the cross of Christ which, by its incarnation, saves mankind) of red apples (they represent the forbidden fruit; before the difficulty to find an apple tree in winter one would have opted for the fir tree). The tree could also be decorated with wafers (they represent the Eucharistic hosts) and at the top the Star of Bethlehem from the fourteenth century onwards. As early as the 15th century, this tree of paradise was erected in the headquarters of corporations and hospitals in Germany, and then settled in the homes of Protestant bourgeois families (Catholic families differentiating themselves with their Christmas cribs), the apples being replaced by round objects like bright red balls.

This Scandinavian and Germanic Protestant tradition is spreading in towns as well as in the countryside (wax candles decorating the fir trees are still expensive), in the seventeenth century with the decoration of the hosts and the Christmas apple replaced by papillotes shaped like roses and other flowers in multicolored paper, but especially in the eighteenth century with the multiplication of decorations. It is nevertheless mentioned for the first time in French territory (but at the time of the holy empire, German territory) in Sélestat, on December 21, 1521, in a book of account of the city which refers to remuneration paid to the forest guards for the monitoring of the cutting of fir trees, a municipal edict protecting the forest from an excessive slaughter by allowing only the cutting of small trees: the decoration of the houses is then done not with the whole fir tree but with branches cut 3 days before Christmas.

The Christmas tree became a deeply rooted tradition in Germany as from the 19th century (both in Protestant and Catholic families), and German colonists exported it to North America in the early 17th century. At the same time, it was gradually adopted by the European nobility: Princess Henriette of Nassau-Weilburg introduced the Christmas tree to the Court of Vienna in 1816, the Duchess of Orleans, of German origin, to the Court of France in 1837. 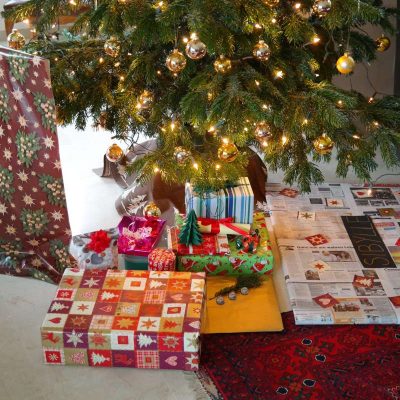