Structuralism is a set of holistic currents of thought that appeared mainly in the human and social sciences in the middle of the 20th century, having in common the use of the term structure understood as a theoretical model (unconscious, or not empirically perceptible) organizing the form of the object studied taken as a system, the accent being placed less on the elementary units of this system than on the relations which unite them. The explicit reference to the term structure, whose definition is not unified between these different currents, is organized gradually with the institutional construction of the human and social sciences from the end of the 19th century in the positivist filiation; it remains the prerogative of linguistics and phonology until its generalization after 1945.

The delimitation of the intellectual boundaries of structuralism after 1945 has become a field of research in its own right, complex and in evolution, with significant divergences according to countries and academic disciplines. However, the plurality of disciplines involved and the methodologies used reflects the heterogeneous nature of this classic definition, and some authors prefer to insert structuralism into a long-term history of scientific ideas, as a contemporary manifestation of theories of knowledge, with a genealogy going back to Aristotle’s philosophy of form. In this line, structuralism is often considered by system historians as one of its precursor currents in the 1950s, alongside cybernetics and information theory in the United States.

The term structuralism is derived from the word structure and has been used sporadically since the mid-19th century. In psychology it was introduced in 1907 by James Rowland Angell in an essay on Edward Bradford Titchener.  In linguistics and literature it was used by the Prague linguistic circle from the 1920s. There Roman Jakobson followed the school of Russian formalism and used the term “structuralism” for the first time in 1929 in a Prague magazine ČinArticle published in Czech under the title Romantic Pan-Slavism – New Slavic Studies ( Romantické všeslovanství — nová slávistika ):

”Were we to comprise the leading idea of present-day science in its most various manifestations, we could hardly find a more appropriate designation than structuralism. Any set of phenomena examined by contemporary science is treated not as a mechanical agglomeration but as a structural whole, and the basic task is to reveal the inner, whether static or developmental, laws of this system. What appears to be the focus of scientific preoccupations is no longer the outer stimulus, but the internal premises of the development; now the mechanical conception of processes yields to the question of their functions.”

Structuralism is an intellectual trend that peaked in the 1960s to 1970s and was sometimes criticized as a fad. There was still a large consensus at the time of its creation with the Geneva School of Linguistics around Ferdinand de Saussure and the Prague School in the 1920s against a purely historical consideration of the language. Transfers in search of fixed structures resulted for ethnology , history and literature , thinking for psychology / psychoanalysis and philosophy of mind. American/Canadian schools developed it through academic exchange ( Leonard Bloomfield ) and emigration. At its peak, many French researchers shaped the current, partly in opposition to Anglo-Saxon analytic philosophy. Marxism was also in opposition, accusing it of misjudging the laws of history. An end was proclaimed with poststructuralism, but its justification and timing remain controversial.

There is no uniform structuralism, but only basic structural assumptions, which are productive in the various structuralisms and start from the system character of the structure. The structure determines the functionality of the parts in the network of a whole.

Structuralism asserts a logical primacy of the whole over the parts and attempts to conceive of an internal relationship of phenomena as structure. Structures organize reality formally and without content; they are independent of the individual structured elements and concrete subjects.

Objects to be examined are not viewed in isolation, since each individual object can only be individualized and viewed within an overall context and can be considered as existing. The focus is therefore on the structure, which makes the object status possible in the first place. An object is not explained through causal relationships, nor through the history of ideas or other continuities, but through its contextual structure, in particular through opposite concepts, which make a certain type of object identifiable and justify its reality in the first place.

For example, a word exists substantially not as a sign meaning something, but through conflicting relationships with other elements of language; the structure of the language should be examined instead of individual utterances.

An object can only be understood by comparing it to other objects and considering its position within their mutual relationships. The structuralist method does not understand its objects as existing in themselves, but as objects that exist in the first place by virtue of their classification in structures. These structures are essentially shaped by the conventions of our access to the world. They explain how objects form and change.

Structural differences as a basic assumption

“The structuralists pose the problem of the formal conditions of the appearance of meaning, starting mainly from the model of language: language, which in itself is an extremely complex and rich object of analysis, also serves as a model for the analysis of the appearances of other meanings that are not actually of a linguistic nature.” (Michel Foucault)

A distinction is made between language as a system and spoken language. Spoken language is the actualization of language by individual speakers. The language includes a self-contained grammatical and phonetic system that is given to the speakers of the spoken language. This synchronically organized system is available virtually in every brain and structures the mass of spoken utterances. The language is actualized in the spoken language, but has no existence independently of it and is mostly unconscious to the speakers. Two other features of language are the arbitrary nature of the linguistic sign and the differential generation of its meaning. The linguistic sign consists of the signifieras a carrier of meaning and the signified as content. The difference between the contents creates the signified and the signifier. The differential nature of the meaning becomes clearest in the example of binary opposites such as woman/man, above/below and good/evil. The good only gains its meaning through the difference to the bad. Without evil there would be no good either. Thus, changing the meaning of evil inevitably redefines the meaning of good. In addition to the linguistic structure, there is also a deep culture structure. The cultural and social phenomena can be explained as models of a more comprehensive structure of differences along the lines of the language. This includes, for example, texts of all kinds or social power relations. This can be illustrated using the example of chess : the meaning of the individual chess pieces is only determined by their functional difference to the other pieces. Similar to chess pieces, individual things and events only interest us if they inform us about their relationships to other elements of the system and thus to the underlying system itself.

Structure as a property of systems

It is a basic thesis of structuralism that signs do not create meaning through self-reference, but through the network of other signs. That is why meaning is never fully present, but always deferred. In addition, the structures are not stable and closed, but changeable and open. Ultimately, meaning is indefinite and flexible. Structures are understood as hidden properties of systems. They only become clear to a scientist when he approaches the system with a suitable initial hypothesis. If structures are uncovered, they are not properties of the examined object, but properties of the theory of the object. These serve to describe the structural relationship of the elements:

Segmentation as a method

Structuralism is based on the basic assumption that phenomena do not occur in isolation but are related to other phenomena. Therefore, it is not the things themselves that are considered, but the relations between the things. The phenomena to be examined are usually very complex. For this reason, certain of their phenomena must first be excluded and partial aspects considered in isolation. Their explanation is intended to promote insight into more complex relationships. The area of ​​the observable is therefore divided into structurally describable and structurally non-describable facts. The describable phenomena are segmented. A connection is reconstructed between the segments.

Under certain circumstances, the segments should be based on a further, more abstract level of description, on which a segmentation of their units is again possible. In all cases, an attempt is made to capture the analyzed phenomena with a kind of “grid” ( synchronic and diachronic arrangement of their symbols), in which each element is determined by the characteristics, correlations and oppositions that can be derived from the relationship of the elements to one another. The individual element must not be understood in itself, but must be understood in its function in the entirety of the synchronic system. So things are presented in a structured and coherent system. Knowledge of the synchronic relationships precedes observations of the diachronic process. It is not enough to look at the evolution of the functions of individual structures as part of the system. In order to understand change, the relationships of a system to all other systems of human activity must also be considered.

Principles The philosophy of law analyzes the fundamental questions of law. It deals with his... 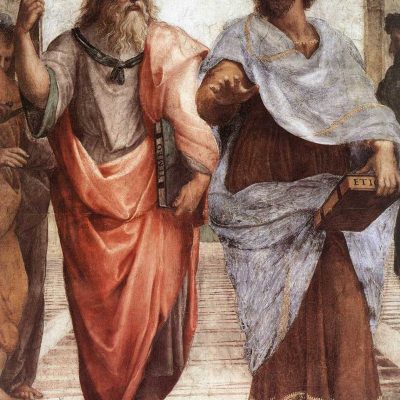 Logicism is an attitude towards mathematics according to which it is an extension of logic...

Phenomenalism opposes the realism of perception by considering that perception gives us access only to...