Web translators use specialised tools, which typically allow the creation of links. Learning to use them takes time and requires web translators to be computer-literate and willing to learn more.

A widely used tool in DGT web translations is SDL Trados TagEditor, for use with Word, Excel, PowerPoint, HTML, XML and other types of files. TagEditor also enables editing of metadata on the attributes and functions of text elements, and can be used in combination with SDL Trados Translator’s Workbench, a translation memory tool. The translator works on the text in a bilingual window, in between tags, and may also modify the codes in the file in order to change the segmentation (typically divide the message of one sentence in two, or combine two sentences of the original version), apply bold formatting to certain words etc, if this improves the readability of the text in the target language. 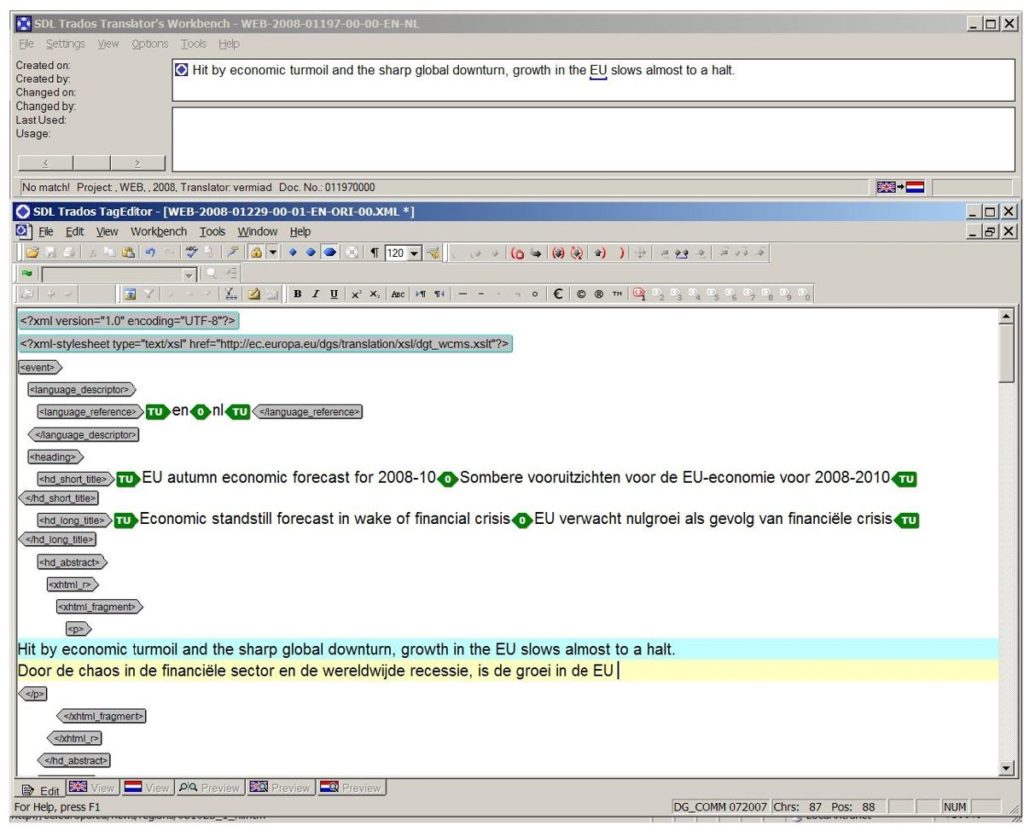 XML document treated with TagEditor and using a translation memory.

TagEditor is perceived as slow and cumbersome by Web Unit staff. The sentence-by-sentence approach common to most translation memory systems restricts translators’ ability to tredit (translate while editing) texts giving prominence to the issues of greatest interest to their readership. Changing the order of two sentences or adding an extra caption is quite complicated.

Some of the translators interviewed insisted that this is not a marginal technical inconvenience but a serious problem for their efficiency. For instance, one of them said that in the early days of the Web Translation Unit, they used to edit the homepage news items more thoroughly than now, partly because they used to work with traditional Word documents, without TagEditor.

Web texts are sent for translation in different formats, depending on the customer’s preference. Although documents in all formats are translated using either Word or TagEditor, each format brings its own benefits and inconveniences for the translator.

XML is the format recommended for EUROPA web content management. It offers web authors many possibilities: they can use and re-use content in a flexible way, as content is separate from formatting. Further, it enables webmasters to upload all versions quickly and without any risk of corrupting the text or mixing up language versions. The negative side from the translator’s point of view is that – in spite of a preview function – you cannot always see what the final product will exactly look like when published. In addition, working with XML is slow: the translator shifts between the editing mode for translating and the preview mode for viewing the (approximate) result, and this takes more time than working in a Word document. 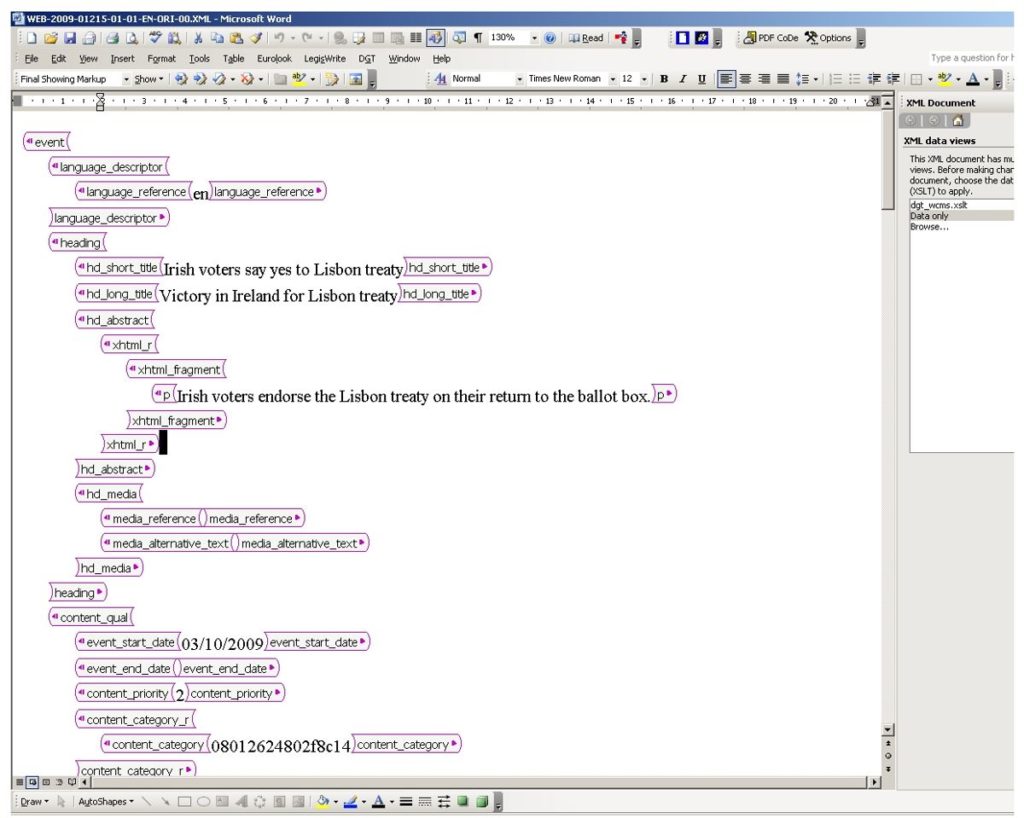 HTML is used by many customer DGs (Directorates-General of the Commission) – despite being less webmaster-friendly than XML, because content and formatting are not separated, and it is less flexible. For the translator, HTML has roughly the same advantages and inconveniences as XML, but with even more codes visible on the screen. Every code in the original must be reproduced in the translation, which makes the process rather painstaking.

However HTML gives translators a better idea of what the page will look like when published. This format is less used today. 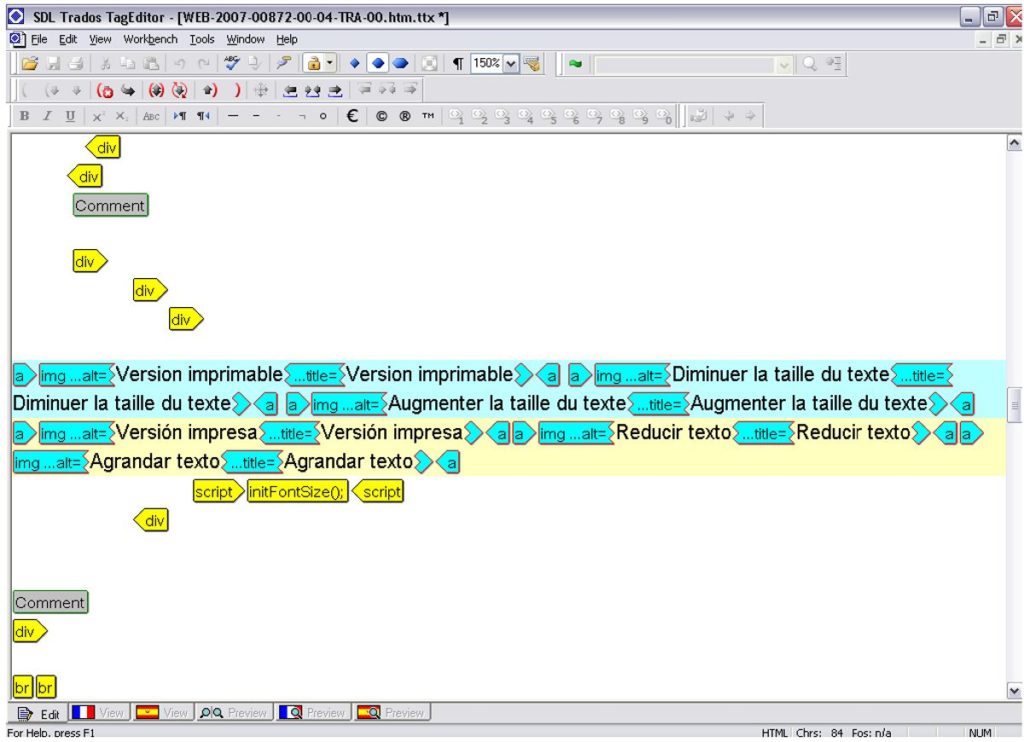 Document in web translation in HTML format, which is losing ground.

Word still remains the most commonly used format for Commission web texts. Handling Word documents is easier and faster, but on the other hand a whole website sent for translation in Word format means that translators cannot see how the different parts are linked with each other. Websites translated in Word are also more prone to mistakes in the publishing phase.

In addition to web texts, the Web Unit also translates most of the Hotline tasks (DGT’s fast-track service for translating short texts of no more than 250 characters), even those that are not meant to be published on the web. These are requested either through an Outlook “task” form or, more and more often, through the web-based Poetry Rapido application, which makes them accessible in Dossier Manager (DGT’s application for creating and handling translation documents).

This variety of formats means that it may take some time for the Web Unit’s planning team to upload the incoming translation task in Dossier Manager. In addition, requesters sometimes send their requests in formats which are hardly acceptable for translation. The Unit’s planning section tries to keep all customers informed of which formats are accepted, to avoid unnecessary delays.

DGT’s web translators tend to prefer the most direct ways of working: ideally they would like always to translate on-line, typing the translation directly in a window and feeding it into the web content management system of the requester, as is done with some customer DGs. This working method enables them to see how their translations will look online, to assess the function of each paragraph, menu item or other text element, and to ensure that navigation works properly.

On the other hand, working in the requesters’ web content management system has various other repercussions. First, it is not necessarily faster or easier than translating with TagEditor and Translator’s Workbench. In addition, translation memories cannot be used.

What is more, work done in this way cannot be integrated into the standard, automated workflow systems. For instance, the translation cannot be accessed through

In Suivi21, a blank document has to be created to indicate that the task has been performed. Lastly, on-line translations cannot easily be exported (saved) to Euramis22.

To make things even more complicated, not all Commission DGs use the same web content management system, in spite of instructions in the current Commission’s internet strategy to use the corporate system. Today, the Web Translation Unit spends a significant amount of time sorting out different kinds of software and systems.

Web translators look forward to the development of translation tools more suited to web based content.

“What we need is one multilingual discussion forum where users can define their profile and... 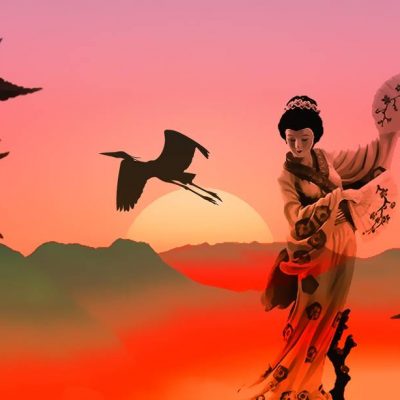 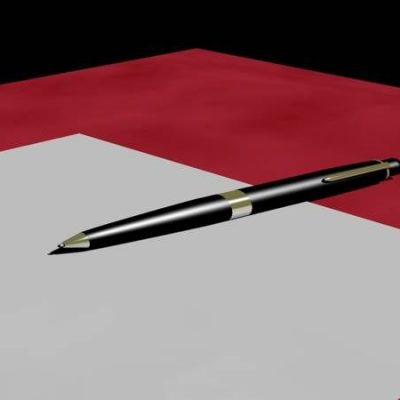 “You don’t have to be a master of prose, but sensitive to that aspect, writing...

There is no doubt about it: people prefer reading in their own language. The Commission’s...