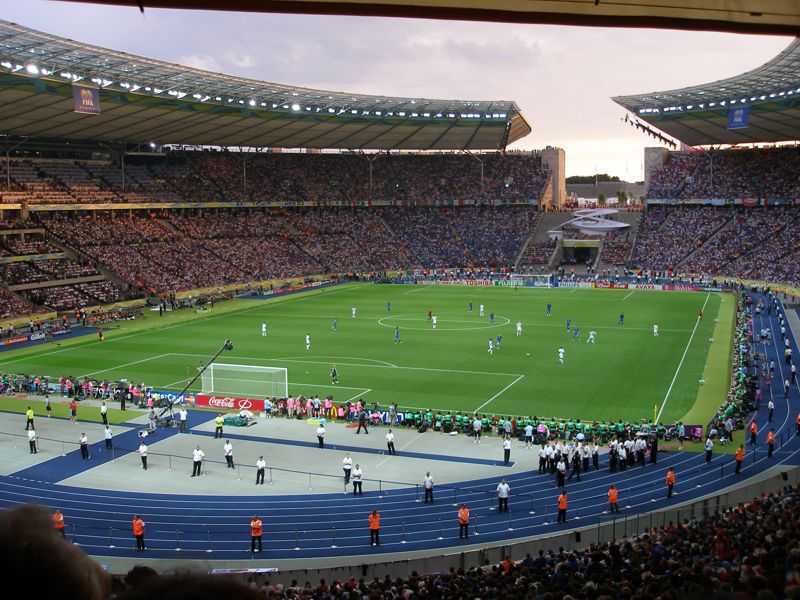 Football, officially Football Association or soccer (in North America), is a team sport between two teams of eleven players in a stadium. The goal of each team is to put a spherical ball into the opposing goal without using the arms, and to do it more times than the other team.

Codified by the British in the late nineteenth century, football has set in 1904 an international federation, FIFA. Performed in 2006 by about 264 million players around the world, football has a number one sport status in most countries. Some continents such as Africa, South America and Europe, even almost completely dominated this discipline. The simplicity of the game and the lack of resources necessary for its practice partly explain this success.

The calendar is dominated by two types of events: those concerning the clubs and those of the national teams. The World Cup is the most prestigious international event. It takes place every four years since 1930. For clubs, there are national championships and competitions.

In club competition, the UEFA Champions League, played in Europe and gaving equivalents in other continents, is the most coveted trophy in the sport, despite the recent establishment of a World Cup clubs.

The first game code date of 1848: the Cambridge Rules. Other universities are following the example of Cambridge and enact their own regulations. Harrow also puts in place a code allowing the use of hands that will give birth to rugby and its variations, such as American football and Canadian football. Football is based solely on the rules of Cambridge, which stand out as the most simple. This notion of simplicity is the founder of football itself, as clearly indicated the subtitle of J.C. Thring rules that refine the resolution of Cambridge in 1862: The Simplest Game.

When the Association Football was founded in London October 26, 1863, E.C. Morley is responsible for synthesis of different rules in use. Blackheath RC who followed the rules of Harrow, was a member of the Football and the debate became heated when a first code of 14 rules inspired by the Cambridge Rules was presented November 24 1863. After several days of debate and amendments, a settlement of 13 rules adopted on December 1, by 13 votes against 4. January 9, 1864 the first match under this new laws of the game is played. They are quite blurred, particularly in the areas of number of players and field dimensions or goals, because an agreement could not be reached on these points. The teams then have thirteen to fifteen players and then move gradually to eleven, despite the resistance of many teams in the late 1860s In 1867, when the Surrey Association Football offers a game of eleven against eleven in Cambridge University FC, this responds by mail: “we play at least fifteen per team and we can not play with less than thirteen players per team.” Law no. 11 states that the use of hands is prohibited. In fact, this is broadly the resumption of the Cambridge Rules and the rules of J.C. Thring, hailed by all as the simplest.

December 1, 1863, Sheffield FC request affiliation to the Association Football. Clubs in Sheffield then follow a particular set of code but close to Cambridge Rules and is played eleven against eleven. For over a decade, the two codes coexist and influence while some clubs enact internal regulations stipulating that only their internal regulation applies. This heterogeneous situation does not prevent the Association Football to refine its rules. The position of goalkeeper is well established in 1870. Similarly, between 1867 and 1870, the rules of Sheffield experiencing some changes such as the abandonment in 1868 of red (shaped like points on Australian football, with two additional poles located 4 yards goals). Clubs in the Nottingham area, which also had a settlement inspired Cambridge Rules, adopt the Association Football’s rules in 1867.

The Association Football Cup was founded in 1871 on the principle of “one cup, two codes”. The Association Football’s hope is to push the Sheffield clubs to adopt its rules. It’s almost the opposite occurs. In fact, the two codes merged in 1877. Since then, the rules are unified and in the custody of the International Board, established December 6, 1882.

The striker (wearing the red shirt) is past the defence (in the white shirts) and...

Football is the name given to a number of different, but related, team sports. By...

Football is popular among children as well as adults. Overview of the Laws There are...

Soccer Shot opens a new class of games based on Japanese Pachinko, a vertical style...

Games revolving around the kicking of a ball have been played in many countries through...

Football pools, often referred to as “The Pools”, are competitions based on predicting the outcome...

Throughout the history of mankind the urge to kick at stones and other such objects...