This article mainly presents the perspective of epistemology as a study of science and scientific activities.

Of all the topics on which this discipline has focused, that of the unity of science is essential. It is structured around four pillars:

More specifically, epistemology seeks to answer questions such as:

The term “epistemology” has a meaning that can vary greatly from one philosophical tradition to another. Even within the same tradition, the distinction between different meanings and the relationship between epistemology and philosophy of science is not always clearly defined.

In the philosophy philosophical tradition

Epistemology, “although it is the introduction and the indispensable auxiliary,” is distinguished from gnoseology “in that it studies knowledge in detail and a posteriori, in the diversity of sciences and objects rather than in the unity of the spirit.

For most authors, epistemology is the critical study of science and scientific knowledge. It is a branch of the philosophy of science that “critically studies the scientific method, the logical forms and modes of inference used in science, as well as the principles, fundamental concepts, theories, and results of the various sciences, in order to determine their logical origin, value and objective scope”.

For other authors, epistemology deals with knowledge in general and can therefore focus on non-scientific objects. The word is also used sometimes to designate such or such theory of knowledge supposed to relate to knowledge in general. Far more rarely, the term “epistemology” is used as synonymous with “philosophy of science”. Hervé Barreau considers that epistemology is the study of science and that this recent term (early 20th century) “replaces the earlier expression of philosophy of science used by Auguste Comte and Augustin Cournot […]”. He adds further: “Epistemology is distinguished above all from the theory of knowledge, as understood by the philosophers of the seventeenth and eighteenth centuries, who had already preoccupied themselves with expanding, in contact with modern science, the old doctrines on human knowledge.”

Jean Piaget proposed to define epistemology “at first approximation as the study of the constitution of valid knowledge”, a denomination which, according to Jean-Louis Le Moigne, makes it possible to ask the three big questions:

In addition, there is sometimes a normative dimension of the analysis. It is not only a question of describing knowledge, but of defining what constitutes valid knowledge.

In the Anglo-Saxon philosophical tradition

Epistemology is the same with the study of knowledge in general, and therefore does not relate specifically to scientific knowledge. For some authors, it is synonymous with “theory of knowledge”. 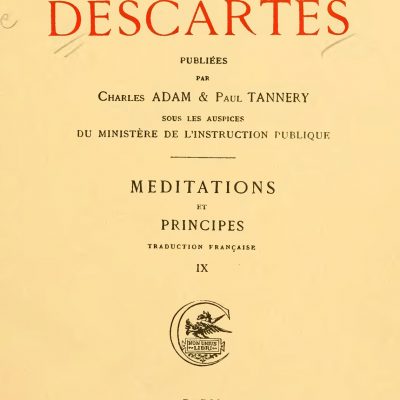 To the deans and doctors of the Sacred Faculty of Theology of Paris Gentlemen, The...